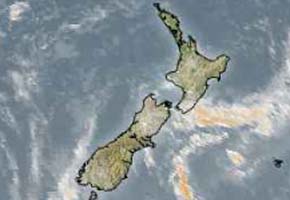 There is an area of isolated heavy showers currently moving through Taranaki and Waikato, this area of heavy showers is also now moving into the Bay of Plenty. This is the heaviest rain around in the country at present although technically speaking it falls into the moderate rainfall bracket. Near Waihi the rainfall rate hit 3.5mm per hour recently and in Te Kuiti 3.0mm was recorded in the last hour.

The highest rainfall for the past 24 hours through till 1pm today was in the ranges behind Motueka at 37.5mm then not far behind in Taranaki at Okato recording 36.4mm.

Some parts around New Zealand are seeing sun, particularly in Westland in the South Island and after all the rain recently Otago and South Canterbury will be welcoming the sun today. Also the east coast north of Hawkes Bay in the North Island.

The warmest spots go to Kerikeri and Gisborne currently floating around 16 to 17 degrees.