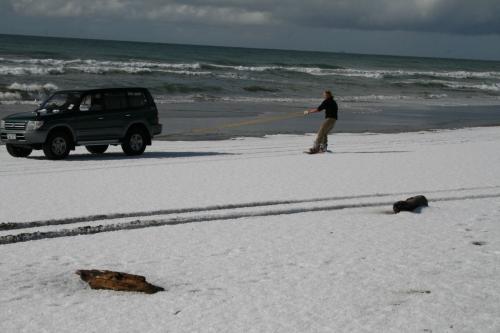 We basked through the warmest winter in 150 years and shivered through the coldest spring in decades – all during a year of weird weather.

Globally, this year was the fifth warmest in the past 130 years, and capped off New Zealand’s hottest decade on record.

But that would have been little comfort to those stuck in record snowstorms during the coldest October in six decades.

MetService weather ambassador Bob McDavitt said three months stood out as the “weirdest weather”. A chilly May was countered by an unseasonably warm August, before temperatures plunged to record lows in October.

McDavitt said the icy spring weather was caused by troughs stalled over New Zealand because of large anticyclones over Australia – coating Sydney with dust storms while Kiwis shivered in late snowfalls.

The hottest temperature was 38C, recorded in Culverden in Canterbury on February 8.

In May a tornado tore through Warkworth, while in July twisters swept through Kaitaia and Cromwell.

Travellers were stranded during record snowfalls in Hawke’s Bay and the central plateau in October.

A month later, high winds blew a container ship off its moorings in Lyttelton Harbour.

December saw hailstorms in Canterbury and thunderstorms in Kaipara, Auckland and Coromandel.

Weatherwatch analyst Philip Duncan said his most memorable weather moment was the May hailstorms that coated Bay of Plenty beaches in ice.

Duncan said it had been a year of chaotic weather. “It’s strange how many places got snow that don’t normally get snow, like Napier, Palmerston North and Wellington.”

Meanwhile, most of the North Island enjoyed fine weather yesterday, with Gisborne and Hawke’s Bay enjoying a high of 26C. The sunny weather is expected to hold through tomorrow.

Weather in top holiday spots, including the Coromandel, Bay of Plenty and Gisborne, will remain fine later in the week, but showers can be expected on Tuesday in most other places.

Winds will also pick up, particularly on the East Coast, but temperatures are likely to remain high.

Its no weirder than other years….January (and other months) has recorded tornados,ie 1975 and other years.Snow has fallen in December and January before,Oct 1982 would have been similar in coolness to this one.I got records and it said words like strange weather etc 15 years ago and probably in earlier times it never really made the headlines except at the time of the event.