Heat set to return to Oz 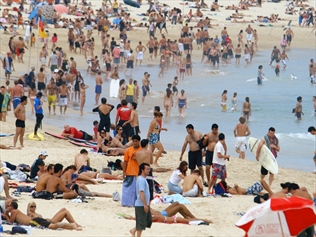 Temperatures across the southern states of Australia are set to slowly rise today before intense heat returns tomorrow and parts of the weekend.

There’s been a brief respite midweek after scorching temperatures earlier had aided bushfire outbreaks in numerous areas as winds peaked at 100kph.

Tomorrow the winds are set to build but shouldn’t reach the heady heights of earlier in the week. Lighter furnace like nor’ westers are forecast to blow out of the interior however the fire risk is still extreme.

Yesterday 49 degrees was recorded in Western Australia in small town Lenora which is just 1.7 degrees off the all time record recorded back in 1960. Alice Springs has just broken a record with eight days above 42 degrees being recorded in a row.

Forecasters still believe parts of central Australia next week could hit 55 degrees as clear skies keep the thermometers near record levels.
The biggest factor for the country baking so far this summer is that monsoonal rains are still tracking to the north of the Northern Territory and clear skies have remained much longer than usual across the interior.

Hot weather is set for tomorrow yet again with Melbourne expecting 37 degrees, Adelaide 35 but slightly cooler conditions across Tasmainia.
A southerly change is expected to cool southern parts of South Australia, Victoria and Tasmania on Saturday but intense heat is likely to remain over New South Wales. 35 degrees is the highfor Sydney on Saturday but the western suburbs are looking at the low forties.

Home image of another scorcher on the beaches of Adelaide