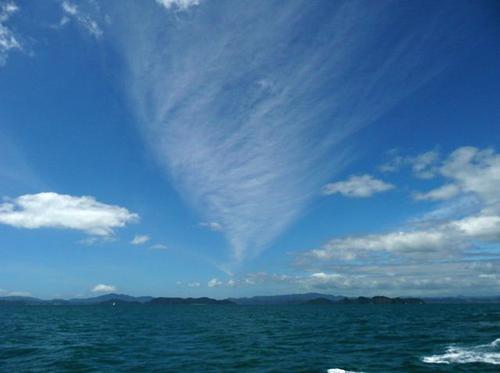 It is proving to be a messy day weatherwise across many parts of the country with temperatures soaring in the north and east, winds howling in the south and east and heavy rain falling in the west.

In Auckland high humidity and a hot sun has helped boost the “feels like” temperature into the low 30s, this hour reports WeatherWatch.co.nz.  The actual air temperature right now is 28 degrees.

At midnight last night WeatherWatch.co.nz reported the temperature in Auckland as 23 degrees with a “feels like” temperature calculated on the humidex at 30.  With little wind it was a restless night for some.

Today the heat continues with another hot night on the way – however windier conditions should help somewhat for those struggling to sleep.

Other parts of the country are also feeling the heat this hour – in Whangarei it’s currently 29 degrees.

Temperatures across Waikato, Bay of Plenty and Gisborne are up to 27 degrees while it’s 28 in Napier and Hastings.

Wellington has a gusty northerly and 21 across the city and up into Kapiti.

A gusty nor’wester is driving temperatures up along the South Island’s east coast.  Yesterday Kaikoura took the national high with 34 degrees.  This hour it’s on 30 with winds gusting to 85km/h.

Meanwhile heavy rain is falling around Milford Sound with spillover from Fiordland into the Lakes District and Southland.  Not enough to reverse current fire bans though.  Cooler winds are also blowing across Southland with temperatures currently 15 and 16 degrees over the region.

In the North Island there are a few showers mainly about Manawatu and Taranaki.

Hi Team. well its been a lousy day here in the Mamaku – Kaimai’s with heavy o/cast sky with threatening black cloud. Wind is blustery at times from the NW, current temp is 20Deg, baro steady at 1026, humid is at 76%.
Looking at this webpage weather chart, it looks as if we are in for more of the same lousy weather for few more days yet ,

Thanks for all your updates – much appreciated!

Would be interesting to know where it was hotter yesterday, Auckland with 28 degrees and 70+% humidity or Kaikoura with 34 degrees and less than 25% humidity.

Great question – we’ve done some calculations and think it would’ve felt probably very similar.  The Auckland temperature may have made people sweat a bit more though – with sweat not being absorbed off the skin as easily – plus there was no cooling wind.  Shows how the humidity plays a big part in our weather – and we hope we can bring humidex readings more often to WW in 2011.