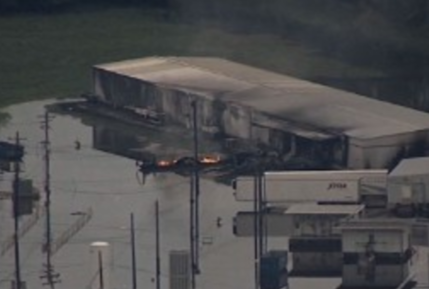 Flood-stricken southeast Texas struggled Friday NZT with a new series of blows that left one city without running water, the operators of a flood-damaged chemical plant warning of additional fires and at least one hospital unable to care for patients.

Nearly a week after Hurricane Harvey slammed into the Texas coast, desperate residents remain stranded without food and water in the wake of unprecedented flooding. Meanwhile, authorities continue to search for survivors and make helicopter rescues from rooftops as the death toll from Harvey and its aftermath climbed to at least 39.
Given the disaster’s scope, the commanding officer who led the federal response to Hurricane Katrina a dozen years ago questioned the adequacy of current relief efforts.
“When you have a combination of hurricane winds, flooding now for five days and you start losing the water and the electric grid, this is a game changer,” retired Lt. Gen. Russel HonorÃ© told CNN.
“Losing electricity itself is a disaster for over a 24-hour period in America to any person because we lose access to water, we lose access to sewers, we lose our ability to communicate.”
The dangers emerging from the historic storm seem to increase by the day.
Beaumont, east of Houston, has no running water after both its water pumps failed, forcing a hospital to shut down. City officials could not say when service would be restored.
In Crosby, two blasts rocked a flooded chemical plant, and more could come.
And in Houston, authorities were looking door-to-door for victims, hoping to find survivors but realizing that the death toll could rise.

A pair of blasts at the Arkema chemical plant in Crosby sent plumes of smoke into the sky Thursday night NZT, and the company warned more blasts could follow.
“We want local residents to be aware that product is stored in multiple locations on the site, and a threat of additional explosion remains,” Arkema said. “Please do not return to the area within the evacuation zone until local emergency response authorities announce it is safe to do so.”

Overheated organic peroxides caused blasts at a chemical plant in Crosby.
The twin blasts Thursday happened after organic peroxides overheated. The chemicals need to be kept cool, but the temperature rose after the plant lost power, officials said.
Containers popped. One caught fire and sent black smoke 30 to 40 feet into the air.
The thick smoke “might be irritating to the eyes, skin and lungs,” Arkema officials said.
Fifteen Harris County sheriff’s deputies were hospitalized, but the smoke they inhaled was not believed to be toxic, the department said. The deputies have all been released.
Harris County Sheriff Ed Gonzalez said nothing toxic was emitted and there was no imminent danger to the community.
Three other containers storing the same chemical are at risk of “overpressurization,” said Jeff Carr of Griffin Communications Group, which is representing Arkema.
Arkema shut down the facility as Harvey approached last week. The company evacuated everyone within 1.5 miles of the plant as a precaution after it was flooded under more than 5 feet of water.
The company has said there’s a small possibility the organic peroxide, which is used in the production of plastic resins, could seep into floodwaters, without igniting or burning.
Harvey forced the shut down of many chemical or oil plants, including the Colonial Pipeline, which carries huge amounts of gasoline and other fuel between Houston and the East Coast. Valero and Motiva, the largest refinery in the country, have also closed some facilities.
– Read the full story here, via CNN.com