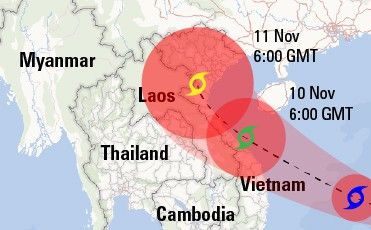 The most powerful tropical cyclone of 2013 anywhere on Earth made a direct hit in the Philippines and made landfall again early this morning in Vietnam.  However the typhoon has now been downgraded to a ‘tropical storm’ amd continues to weaken as it moves out of Vietnam slowly and into south west China.  Flooding and mudslides will now become the main risk.

The news story below is via Weather.com

According to the Joint Typhoon Warning Center, Typhoon Haiyan was making landfall along the coast of northern Vietnam overnight and this morning NZT.

Haiyan arrived on the coast as the equivalent to a minimal Category 1 hurricane.

Haiyan reached shore near the city of Cam Pha, Vietnam, about 100 miles east of Hanoi. Several hours earlier, the center of Haiyan narrowly missed the southwestern coast of the Chinese island of Hainan, but that island experienced wind gusts as high as 119km/h on its west coast, downing tree branches.

Haiyan is expected to curve north and northeast across extreme northeastern Vietnam and into the Guangxi Zhuang Autonomous Region of southern China, rapidly weakening as it encounters rugged terrain.

Coastal storm surge flooding and locally heavy rain will remain in northern Vietnam and southern China as Haiyan’s center moves ashore. Local flash flooding may be a concern with Haiyan’s remnants in far northern Vietnam and parts of southern China through Monday and perhaps Tuesday. The China Meteorological Administration has issued a “yellow warning of rainfall” for the provinces and regions of Guangxi, Hainan, southwestern Guangdong, central and southwestern Hunan, central-northern Jiangxi, and southeastern Guizhou.