Home > News > Greenland: The football season where you...

Greenland: The football season where you can glimpse whales and icebergs 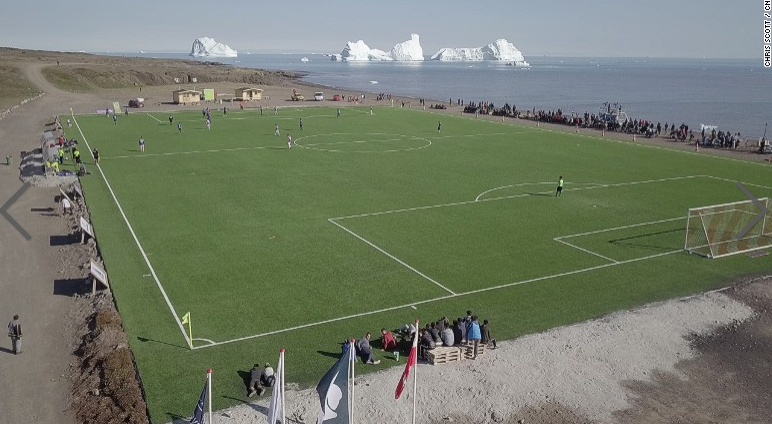 Qeqertarsuaq, Greenland (CNN) — It’s not often you get to glimpse icebergs and whales while watching a game of soccer, but that’s only one of the reasons why the Greenlandic football season is one of the sport’s most unusual.

It is the only one to take place inside the Arctic Circle, while the country’s major tournament itself lasts just a week. Compare that to most major European leagues which run over nine months.
Then there are the considerable geographical challenges Greenland faces in putting on football matches. The country is as big as Germany, France, Spain, Italy, Austria, Switzerland and Belgium combined but only 20% of the country is habitable.
Moreover 80% of the country is ice sheet, the second largest in the world following Antarctica. There is also no flat land, few suitable grass areas and for nine months of the year no football can be played outside as the pitches are covered by nearly two meters of snow.
The vast distances between cities and unpredictable weather conditions make travel at times near impossible, even in the summer, ensuring organizing games can be problematic.

Broken bones
Yet, somehow, the beautiful game not only survives, it thrives — it’s the country’s most popular sport by some distance. There are currently 5,000 players in Greenland, that’s 10% of the population.
This year was the 47th year of the championships in its modern guise but up until 2016 football in Greenland was played on pitches of sand and rock.
Which meant teams’ physiotherapists were kept busy. It wasn’t unusual for there to be several broken legs, noses, arms and various other bones after each game. It was actually expected and still people played.
“It was just basically a hard sand pitch,” Johannes Groth, the captain of defending champions B-67 told CNN Sport. “Sometimes there were big rocks so when you played hard it would hurt very much.”
“It was really dusty so we had to water the pitch just so we could control the ball,” added B-67 midfielder Patrick Frederiksen. “It was difficult to play on as you were never sure where the ball would land or bounce.”
The pitch was even worse for goalkeepers said former G-44 captain Johan Frederik Zeeb, who won the championship in 2013.
“In order to be a goalkeeper on those pitches you really had to give your full self,” he said.
“You had to have several layers of clothing to be a goalkeeper on dirt ground. You got a lot of scratches all over your body.”
Even today many players choose to wear gloves and leggings to protect their bodies, a hangover from the dirt pitches they grew up on.

Bright future
Two years ago Greenland stepped up its efforts to become a recognized FIFA member and invested in several artificial turfs around the country.
“We have an agreement between the Danish Football Association and the Greenland Ball Games Union to develop football in Greenland,” said Danish FA president Jesper MÃ¸ller.
“It was our plan to build six full sized artificial pitches by 2021 but there are already 11 or 12. It has been a great success.
“It’s a long journey but we’ve started it,” added MÃ¸ller. “The future of Greenland football is bright.”
Disko Island
This year’s tournament was played in Qeqertarsuaq on Disko Island. It’s an ancient volcanic island, now upgraded with a new artificial pitch sandwiched between red flattop mountains — which the locals call the Grand Canyon — on one side and a beach of black sand on the other.
If it’s got the feeling of the land that time forgot, Greenland will always stand out for the brevity of its season.
To qualify for one of the eight spots in the week-long tournament, 40 teams from all over the country competed in regional qualifiers during July.

No wonder it’s called the beautiful game …
The final took place between B-67, from the capital city of Nuuk, who had won the tournament six out of the previous seven years and their city rivals IT-79.
It was a tense affair that threatened to be a rout at times as B-67 missed chance after chance, but their gung-ho tactics left them exposed at the back to IT-79’s counterattacking football and after extra-time the score was tied at 2-2.
Peri Fleischer was the man who made history, scoring the winning penalty to secure IT-79’s first ever title.
“This is the club’s first championship and it means everything to us,” IT-79 captain Kaasannguaq Zeeb told CNN. “Many of the players are crying, it’s very emotional for us.
“The club only started up again in 2014 with only about four or five players. We had to train with our ladies team as we didn’t have enough players to train on our own.
“We have built from the bottom and now we are the champions of Greenland!”
IT-79 founder Allan Geisler, who had to sail 18 hours to reach Disko Island, described their 2017 success as the “biggest achievement in our history.”
“B-67 have been champions for many years so I’m glad we beat them. It’s incredible. There will be a huge party.”
With the tournament over the players will now have to wait 10 months to be able to play outside again and a year for their next competitive fixture.
– By CNN’s Chris Scott

wow, a great story showing the wait between games and the effort some take to get there
#Qeqertarsuaq on #DiskoIsland.
No chance of getting sport overload like we get!