Great weather on the way for the end of the week 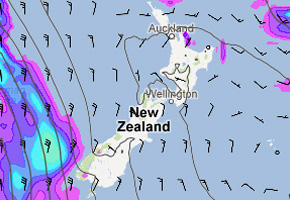 The weather around New Zealand tomorrow is looking very good with pleasant temperatures for most regions thanks to an anticyclone out to the east of the country extending a ridge back over both islands.

The West Coast of the South Island will be a bit cloudy though with showers moving north along the coast during the day. Also parts of the Central North Island, Waikato, inland Bay of Plenty much like today may receive a few isolated afternoon showers however the risk of thunderstorms forming is fairly low.

Another great day in store for the North Island on Saturday, fog morning and night is possible south of Auckland into the Central North Island. In the South Island it will be wet on the West Coast with a few heavy falls in South Westland as a northerly airflow builds, mild out east with temperatures in the high teens and some high cloud.

Another sunny day about the North Island on Sunday however some high cloud will increase from the west during the day and north to northeasterly winds will increase, in the South Island expect wet weather on the West Coast as a front moves north.

Sunny out east on Sunday in the South Island with some high cloud however a few showers may push off the ranges in the morning for Canterbury and in the afternoon for Marlborough, temperatures once again in the high teens in the afternoon.