Great summer weather today however a chill in the south 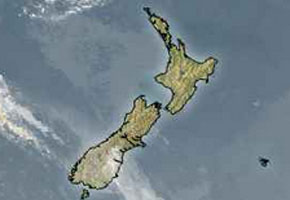 The weather across New Zealand has largely been sunny and warm for most. Some cloud has been touching the western coastline of the North Island and may push inland a little this evening.

The southern half of the South Island has had a front slowly working it’s way north from morning and is now getting into Mid Canterbury as expected, this front mostly contains cloud and a few drizzle patches although the odd shower may flair up on it’s leading edge as it enters Canterbury.

Auckland has a southwest breeze that is not strong but not unnoticeable at around 25 km/h. Wellington takes the cake with the windiest conditions, a northerly there is averaging 45 km/h

Christchurch through to Gisborne has had the warmest high’s today ranging from the mid to late 20’s. Dunedin is currently the coldest on 12 degrees with southwest winds.