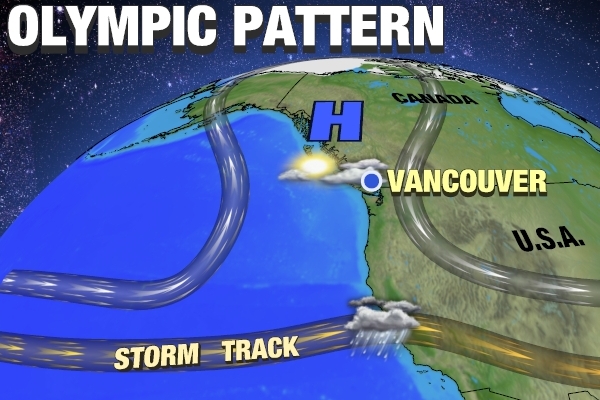 There may not be a hotter item on sale at the Winter Olympics in Vancouver right now than… sunglasses.  Now, I’m under no illusion that sunglasses typically sell well in the winter months.  After all, the storm track often finds itself pointed squarely at British Columbia for days on end.

If you’ve watched any Olympic coverage of outdoor events, you may not believe me.  Check out some live cams.  That bright orb called the sun is out!

Expect sunny days with highs in the late single digits at the mountain venues.  Early morning lows should bottom out in the minus single digits.  You may have just picked up on the “negatives” of this pattern.

With afternoon highs above zero, there will be melting snow, followed immediately by refreezing overnight.  No “natural” snow from Mother Nature to replenish the slopes is expected the next few days.

In fact, this pattern should hold firm until perhaps the middle of next week, when, the storm track is expected to reposition itself toward, you guessed it, Vancouver, just in time for the final days of the games.

With that in mind, perhaps a sunglass rental business would do well in the Northwest.

The rest of the week, strong high pressure in the atmosphere’s upper levels will act as a gigantic rock in the stream, diverting the main storm track well south.

Why cant they use snow making machines,we use them here all the time when its much warmer than there.