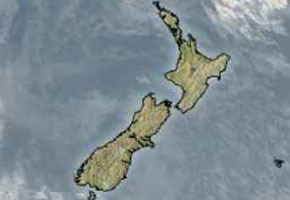 The weather may be stunning across many parts of New Zealand today but that doesn’t mean it’s overly warm in all areas.

With an anticyclone over New Zealand we are getting some sunny weather at last, although Northland and the east coast of the North Island are still copping it a little bit with cloudy skies and a few showers mainly north of Hawkes Bay. Temperatures are mostly as expected, cool in the east and about the Central North Island with high’s between 9 and 11 degrees currently. Tauranga across to the Waikato and further north are getting temperatures in the mid teens.

It will be frosty tonight in many inland regions and while it will get quite cool in Auckland frosts should keep at bay with a low of 3 or 4 degrees expected there.

Sunny weather for most in the South Island today also however there is a little cloud still about the Marlborough coastline in the east, it will slowly break away as the day goes on and southeasterlies ease. While it is sunny for pretty much all districts it is not overly warm in the south today, we have a pesky northeasterly breeze in Christchurch currently that means it’s only getting to 8 or 9 degrees and won’t likely get any higher. Other cities are experiencing similar temperatures although winds don’t look to be as bad.

The warmest places in the south today are Hokitika and Westport on 12 degrees, around Nelson it is 13 to 14 degrees. Clyde got down to –5.2 last night and tonight many areas will experience frosty conditions again with some thin areas of fog possible, Saturday morning may hold a greater chance of fog in the east.