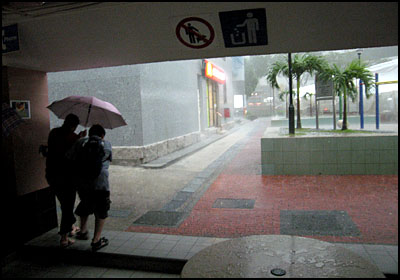 Flooding in England, bushfires in Australia, high temperatures in eastern NZ and now flooding in Singapore, supposedly a once in 50 year event has all taken place in the last 48 hours.

The big clean—up is underway in many areas across Singapore which were flooded due to the heavy rainfall.

Environment and Water Resources Minister Yaacob Ibrahim has said that work is ongoing to improve the structure of the drains to cope better with such events. He said what happened this weekend occurs only once every 50 years.

The wet season, due to the northeast monsoon, could well spill over into January.
The damage in affected areas, such as an underground carpark at Sixth Avenue Centre, is still being totalled up. Residents told MediaCorp that workers toiled through most of the night to pump out the flood waters, which apparently came up to about 2 metres.

Workers were still pumping out debris that had swept into the drainage areas yesterday. Some residents said they were still in shock after seeing their cars float away from their lots.

Amidst the clean—up, car workshops are reporting increased business for repair works that range from drying out cars to repairing engines, costing over S$10,000.