Get used to it being hot and humid in the north 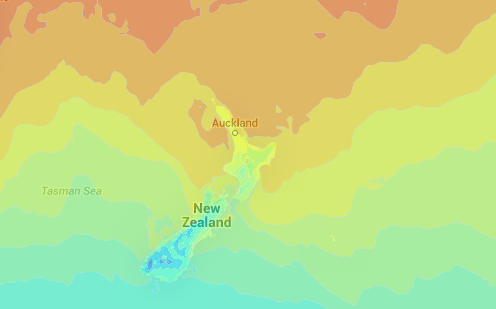 The North Island is now locked into a very humid, very warm, weather pattern for the next 10 days at least says WeatherWatch.co.nz.

The next 10 days have highs hovering around 27 and 30 degrees, which may not sound overly hot to some people but with humidity between 60 and 90% for much of this time the ‘feels like’ temperature will be around the low to mid 30s.

This will affect a number of North Island regions, especially northern and western areas.

Overnight lows will be tough for sleeping in too – with temperatures hovering around 20 degrees at the coldest time of the day, and with humidity often closer to 100% at night making it feel like the mid to late 20s for some.

As the winds move around a bit over the next 10 days there may be some breaks in the humidity but generally speaking there is a lot of sub-tropical air spilling over New Zealand as we end January and move into February.

As of 7:45am humidity levels were already close to 100% across the upper North Island with temperatures already in the low 20s.

The humidity and heat will today – and possibly tomorrow – combine to create isolated thunderstorms and big cloud build ups around the North Island.

At the same time that the North Island sweats, the South Island has a cool – or refreshing change, especially in the south and east.

As of 7:45am humidity was high in these areas too – but it’s a damp, cold, humidity with highs ranging from 10 degrees in Dunedin to 13 degrees in Christchurch this hour.

Is this current run of warm, damp easterlies consistent with the el Nino predictions?

Hi there Rich – no, not at all. In fact it’s more like El Nino’s opposite, La Nina.   We certainly thought this summer would be a bit drier, but we also maintained for the past two years that every El Nino is different in NZ, as we’re such a small country.  More humid, somtimes wet, easterlies coming this weekend too.