Get the umbrella out in the West, get ready Taranaki on Sunday 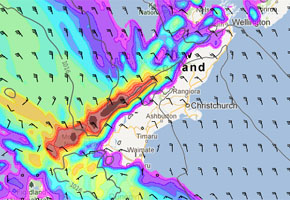 Heavy rain is still forecast to makes it’s way right up north along the West Coast starting in Fiordland in the early hours tomorrow then easing in the evening, progressing to areas north of the Glaciers by midday Friday then the heaviest falls will reach north of Westport by midday Saturday. Heavy rain will ease north of the Glaciers on Sunday morning as the slow moving front associated with this system makes it’s way north.

Overall amounts from early Friday through to Sunday north of the Glaciers are expected to be 300 to 400mm in the ranges, around 100 to 200mm on the coast itself. South of the Glaciers rain will be heaviest tomorrow but the duration will be a little shorter as conditions ease in the evening, 200 to 300mm of rain is expected in the ranges down there with up to 100 to 150mm on the coast.

Temperatures will average about 10 degrees on the West Coast for Friday.

Northwesterly winds will be strong about inland areas east of the divide tomorrow but gale conditions should keep at bay, winds will ease about Otago in the morning then later in the day about Canterbury and Marlborough.

Monday might be a day to watch for northwesterly gales in inland areas mainly north of Canterbury, this is looking to be a period of pre frontal winds ahead of an evening southwest change.