Gales wrap around low – calm in the middle 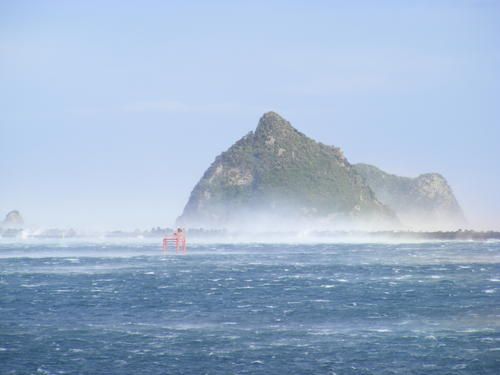 The centre of the low responsible for significant flooding yesterday and today is also responsible for damaging gales around a number of North Island regions today reports WeatherWatch.co.nz.

Winds this morning have eased significantly in Northland and Auckland – while gales are hitting from Waikato to Taranaki, on the outer edges of the low.

“It really is the calm of the eye over Auckland and Northland today” says head weather analyst Philip Duncan. “The low has stalled over the upper North Island so we have lighter winds in Northland and Auckland today, but you only have to travel a little further south and conditions are far windier, where those strong easterlies are wrapping around the centre of the low”.

WeatherWatch.co.nz has received a number of reports of damage, especially from around New Plymouth where some locals are saying it’s the windiest it’s been in decades.

“Haven’t seen it like this since Bola” says our New Plymouth reporter Greg Taylor.  “This photo was taken from Ngamotu Beach New Plymouth. The waves are heading off shore and over the breakwater the wrong way”.

Winds over 120km/h have been lashing the region since early this morning.

“Windy in Palmy rural, had a few showers and power flicking ..don’t know how much longer one off the gutters will hang on to the house for, its flapping around im sure they aint ment to be doing that!” wrote Lisa Mckelvey on the WeatherWatch.co.nz Facebook page.

A Waikato reader, Kylie Parker, wrote “Its bloody windy in Te Awamutu, house shaking a wee bit at times much worse than the weather bomb couple of weeks ago”.

Waikato was mostly sheltered from the weather bomb winds two weeks ago, despite a severe wind warning issued by MetService on the day.  The winds from this low are coming from the east, which WeatherWatch.co.nz says tends to be a worse wind direction for many Waikato centres.

Reports of damage to some buildings are also coming in.  “Some schools are closed, trees are down, powerlines are down, damage from Waitara to Oakura, and I’ve just been told an elderly guy is being helped out of his house in Oakura …[with his] street cordoned off and a divert around it” wrote Joanne Mitchell.

WeatherWatch.co.nz expects little change in the weather set up today as the low in the north continues to only slowly inch south west towards the Tasman Sea (to lie west of Auckland and Northland at noon Wednesday).

However the creation of a new low to lie just east of Northland tomorrow afternoon will again see wind and rain return to the upper North Island overnight Wednesday and into Thursday morning before clearly quickly.