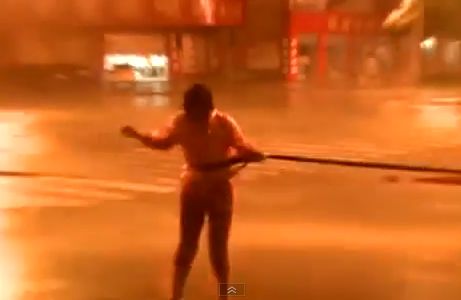 Here in New Zealand we’ve often seen TV journalists trying desperately to make a story about a storm – when there clearly isn’t one.  Thick jackets, umbrellas, scarves…and often it’s just cloudy, dry and calm where they are.   However this Chinese reporter perhaps went a little to far the other way – she didn’t let a recent typhoon hold her back from getting the best camera shot.

Standing in an inner city street, tied around the waist by a huge rope, she has to squat on the ground at one point as the hurricane force winds blast her.

As her report comes to an end, one of her crew walks out and struggles to help her back behind the camera as the winds blast them both.

Our thanks to WeatherWatch.co.nz reader Richard Stanton for sending us the link!