Fronts approaching in the Tasman Sea 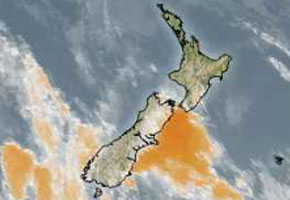 Fronts are starting to line up in the Tasman sea heading on their way towards the West Coast of the South Island, already lightning has started in Fiordland in the last hour and this area of unstable activity will move northwards along the coast through this afternoon and evening.

This coming Saturday mostly later in the day and during Sunday thunderstorms are likely to occur, especially on the West Coast of the South Island again and western parts of the North Island and perhaps elsewhere so keep an eye out for unstable skies.

Currently the warmest spot in the country is Hawkes Bay on 22 degrees, but right along the east coasts of both islands most regions are not far behind. Northwesterly winds are likely to ramp up this evening and tonight over the South Island and lower North Island with gales in exposed areas.

Apart from the rain entering Fiordland and parts of South Westland it is actually dry in most places, a fair amount of the North Island is not having a bad day at all although westerlies are a little breezy with some cloud in western areas.