Frontal system moving on up 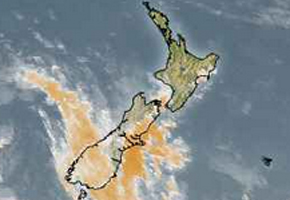 A front is currently moving north over the South Island and with it rain has been falling on the West Coast of the South Island, most of the activity has been about Fiordland and South Westland but North Westland gets in on the action this evening. The front has produced some thundery activity too but nothing overly active.

Out east temperatures have been reasonable but nothing too warm in the South Island this time round, thick high cloud and a northeast breeze about Christchurch for example has kept temperatures from climbing very high.

Temperatures for most of the North Island have been in the high teens or low 20’s making for a good day, winds have been fairly gusty from the west about the lower North Island however.

The front mentioned at the start of this story moves onto the North Island tomorrow however it should weaken a bit, only regions out west are most likely to receive showers. Eastern areas of both Island fingers crossed look likely to have another great warm day on the cards.