Front sweeping across the country 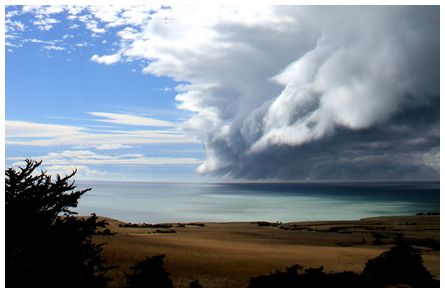 A front is sweeping over the country and most places are set for a band of rain or showers and some snow to low levels over the south and east of the South Island.

The weather has been largely dry over the country during the week but this weekend it changes and next week much cooler temperatures are set for the lower two thirds of the nation.

yesterday it was warm across many regions with a number of centres topping the twenty degree mark but today across the south some areas may struggle to top double digits!

After the recent warmth it’ll come as a bit of a shock to the system and tonight some inland frosts are possible over the Mainland.

Guy Fawkes is set to go on Monday night however tonight many events are taking place up and down the country.

Auckland over the last two to three days has been dogged by some cloud with a west to sou’ west wind but today it’s shaping up to be more ominous however skies look a little brighter by this evening.

Wellington has been hit by the wind but a southerly is expected to cool temperatures down but still be gusty at times this afternoon.

Christchurch is set for a real change with cold temperatures, southerlies with showers or rain at times. A far cry from some very warm temperatures in recent days and Dunedin is certainly going to be cold but should clear up earlier than its northern counterparts but it’ll feel chilly in the south to southwesterly.

Early November is seeing a change in weather patterns but the fronts still seem to be coming. Hopefully though they will become less and less as the month advances and lose some oomph in the process.

Same old same old for Auckland…SW winds pull back at night then the high pulls back and strengthens the isobars in the afternoons before repeating the process.