Home > News > Front not moving as fast, the outlook fo...

Front not moving as fast, the outlook for Wednesday 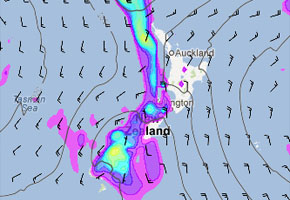 The front in the Tasman Sea is definitely being held up by our anticyclone out to the east of New Zealand, infact tomorrow it will squeezed between the high out east and another high out west. While heavy rain did look possible for a time about the upper North Island that is now looking to be postponed till later in the week and even then the heaviest falls will be in a different place, near East Cape and northern Hawkes Bay as a low descends from up north.

Tomorrow’s heaviest rain is likely to be about North Westland and Buller, overall amounts though shouldn’t be too bad with 50 to 80mm of rain expected in those areas from overnight tonight easing in the afternoon tomorrow.

There is still a chance of thunderstorms tomorrow afternoon in Canterbury with a southwest change so it will be something to watch. The risk of storms overnight tonight and tomorrow morning has diminished somewhat for the West Coast of the South Island but a chance still remains. Northlands chances of a storm tomorrow have pretty much gone. It is a long way out but early next week a big cold pool of air may move over New Zealand so that is the next thunderstorm opportunity.

Apart from rain on the West Coast tomorrow and possible storms in the afternoon for Canterbury most of the North Island will remain dry although there is the chance of the odd brief shower at times north of the Waikato with fairly cloudy skies and northeasterly breezes, eastern regions in the north will have a sunny day and northerly winds.

Expect showers and south to southwesterly winds in Southland and Otago. Marlborough will have dry but cloudy weather and northwesterlies easing during the day, perhaps a few brief showers may spread from the west at night.