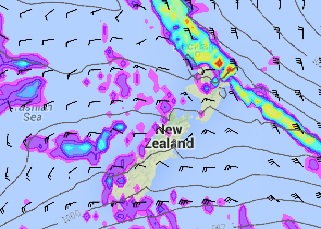 The apex of this spring storm that has been causing havoc about the country moves over the North Island today, in the form of a front. This will more then likely bring heavy rain to many areas especially in the west with strong to gale northwesterly winds preceding the system.

Winds are not likely to be as strong as the ones that caused trouble for North Otago and Canterbury, however they will still be fairly reasonable. While the rain should spill over from the west into the likes of Wairarapa, Hawke’s Bay and Gisborne , it is not likely to be very heavy.

During the afternoon and evening, this front clears away to the northeast offshore, and sunny spells gradually increase behind it, and winds will change lighter westerly behind the front.

Once this front moves away, the country can breathe a sigh of relief as the meanest part of this storm system will be over.

A few further fronts affect the country on Friday and Saturday, by Sunday an anticyclone moves over bringing mainly settled conditions – however it may be short lived.

Saturday will actually be windier than tuesday and yesterday was.