Front moves onto North Island tomorrow but runs out of puff 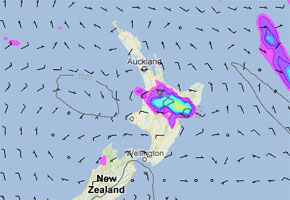 The front that has caused torrential rain on the South Island’s West Coast and about the main divide will move onto the lower North Island overnight then in the afternoon move on to the upper half.

It will be running out of steam as does though and and only some in the west will see a few showers as this front moves through, showers are not likely to get any further north then Auckland.

The east coast will remain fairly dry in the north but there is a however as always…..

Late afternoon there may be a few showers trigger about Bay Of Plenty plus the ranges of East Cape and northern Hawkes Bay due to high surface moisture and wind convergence between the weakening front and onshore winds, so this could deliver a period of rain late afternoon and evening for some in the aforementioned areas.

Just looking on Metservice rain radar, the thing is struggling to make headway over Cook Strait, what a girl ha!!