From our unusual files: Ice dusting 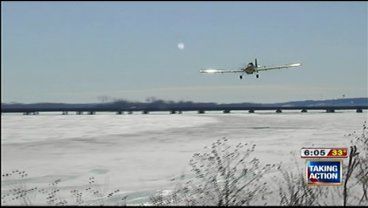 The potential of flooding this spring is all too real for Nebraska’s Emergency Management Agency. It’s taking action to break up major ice jams in the Platte River before it’s too late.

Planes dust stripes of black onto miles of thick ice covering the Platte River. They’re dumping 77 tons of coal ash in hopes of breaking up the ice to prevent future flooding. “We want to get it cleared out between basically upstream of the Platte River bridge to where the Elkhorn comes in,” said NEMA Assistant Director, Al Berndt.

Ice jams happen when rivers thaw too fast and huge chunks of ice break free, then clog the channel, backing up water behind them. The ash is supposed to create solar heating on the ice which breaks up the monstrous pieces before spring weather melts everything at once. “We’re attempting to medicate the situation prior to the flooding or to lessen the impact of flooding,” said Berndt.

It’s a $100,000 dollar operation with no guarantee it will work. Action 3 News asks, “is this enough ash to do the job?” “This is how much is going to be put on based on the recommendations of the Omaha Army Corps of Engineering,” said Berndt.