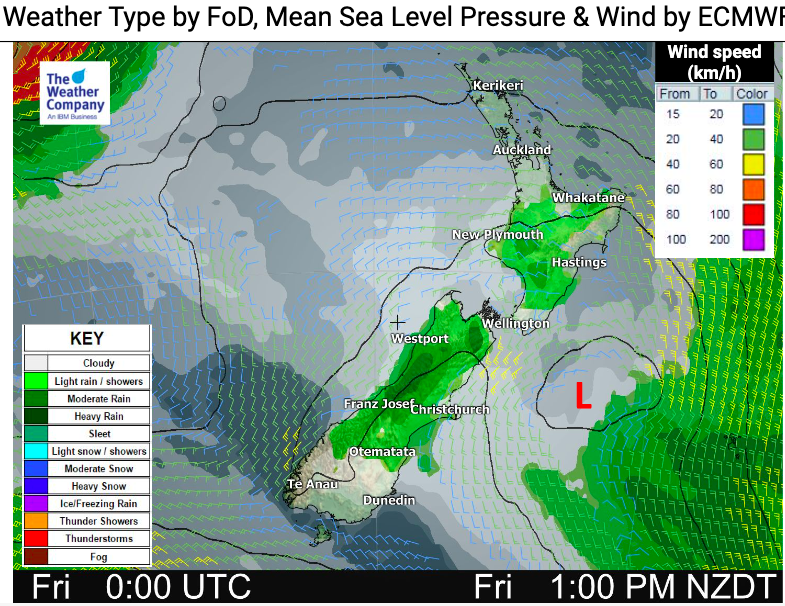 A pool of colder southerly air is moving up the South Island with a few showers today. It’s enough to really drop the temperatures back from the hotter northerlies we had on Thursday.

But as Coastal Otago and Canterbury especially feel the temperature drop, nearly everywhere else in NZ has warmer than average conditions.

Southland and Wellington are both about average today.

Showers and drizzle affects most regions at some point today – although many places are overall mainly dry with accumulations not too great.

The very north and very south of the country look to be driest overall.

THE REGIONALS (Remember, see your local HOURLY forecasts for much more detail where you live!)

Western North Island (including Central North Island)
Any rain should clear before dawn then fairly cloudy, some sunny spells. Mainly dry but a few showers might develop inland later for a time. Light winds from the westerly quarter.
Highs: 17-19

Eastern North Island
A mix of sun and cloud with afternoon downpours in the ranges. Variable winds.
Highs: 19-23

Canterbury
A colder day with a southerly change bringing the chance of a shower this morning, otherwise dry.
Highs: 11 – 15

West Coast
Cloudy with showers or patchy rain, especially in the mountains, Light winds from the west.
Highs: 17 – 19

Southland & Otago
A cooler southerly change brings in a mix of sun and cloud for Southland and early showers and patchy rain clears Otago to the north. Coolest in coastal Otago.
Highs: 10-17