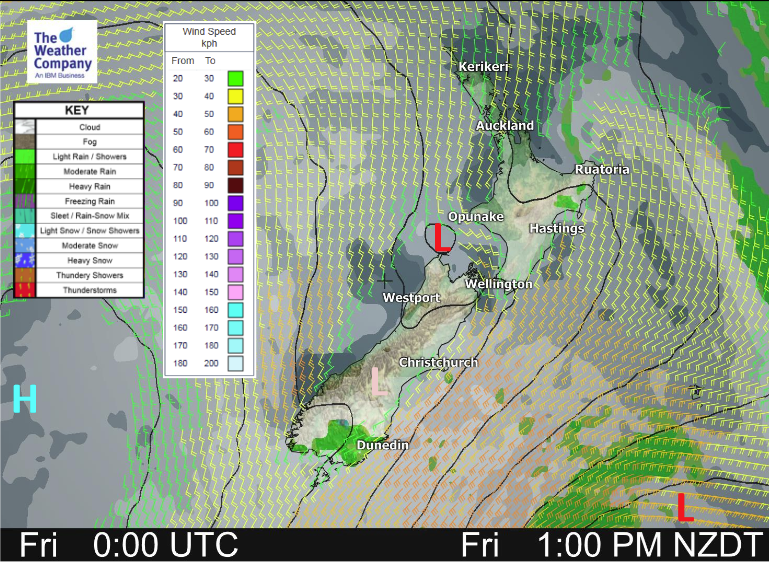 A south to southwesterly airflow lies over New Zealand today.

Expect a few showers about eastern regions today however large parts of the eastern South Island dry out this morning. Later this evening / overnight showers move into Coromandel and Auckland.

Temperatures in the east will be cooler than normal while out west highs are about average for the time of year (please reference map below).

South to southwesterly winds are breezy in the east especially about the coast then easing later today.

Western North Island (including Central North Island)
Cloudy areas, breaking to some sun in the afternoon especially the further west you are. South to southeasterly winds.
Highs: 17-20

Wellington
Morning showers then drying out in the afternoon with cloud breaking to a few sunny areas. Breezy southerly winds.
High: 16-17

Marlborough & Nelson
Early showers clear Marlborough then becoming mostly sunny, southerly winds tend easterly in the afternoon. Nelson has the odd shower, clearing in the afternoon and some sun may then start to break through. Afternoon northerlies for Nelson.
Highs: 17-19

Canterbury
Early showers clear although a few showers may hang about the outer Peninsula during the day, expect a mix of cloud and sunny spells. Cloud thickens again later in the evening with a shower or two returning to coastal areas. Cool southwesterlies, breezy about the coast then easing later in the day.
Highs: 15-18

West Coast
Mostly sunny weather after any early cloud clears, some cloud about Buller may bring a shower or two in the afternoon. Light winds tend southwest after midday.
Highs: 17-21

Southland & Otago
Occasional showers, clearing in the evening. Central Otago has cloudy areas and only the risk of a shower. Cool southwesterly winds, breezy about the coast.
Highs: 13-17