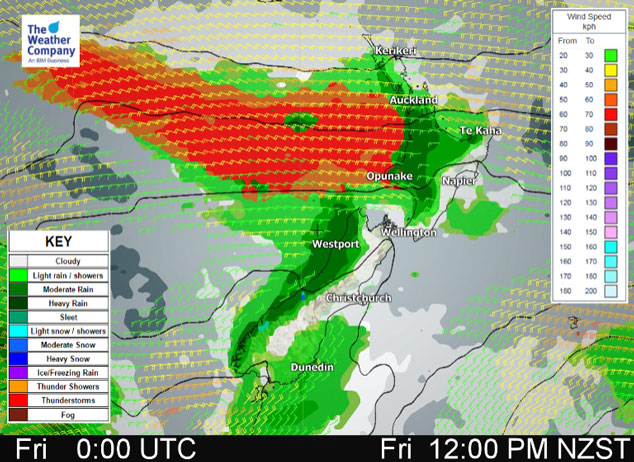 A westerly airflow lies over New Zealand today, rain or showers in the west, mainly dry out east.

Northland, Auckland, Waikato & Bay Of Plenty
Mostly cloudy, the odd shower then some patchy rain from midday. There may be the odd isolated heavy fall in the afternoon then easing evening. Breezy west to northwesterly winds.
Highs: 16-21

Eastern North Island
High cloud, some rain spreads into Wairarapa during the morning then clears around midday. Northwesterly winds.
Highs: 22-24

Marlborough & Nelson
Morning rain for Nelson, spits for Marlborough then clearing with sunny areas developing in the afternoon. West to northwesterly winds.
Highs: 19-22

Southland & Otago
Morning rain then the odd shower, clearing in the afternoon. Some sun may break through later in the day before dusk. Northeast winds change west to southwest in the afternoon.
Highs: 13-17