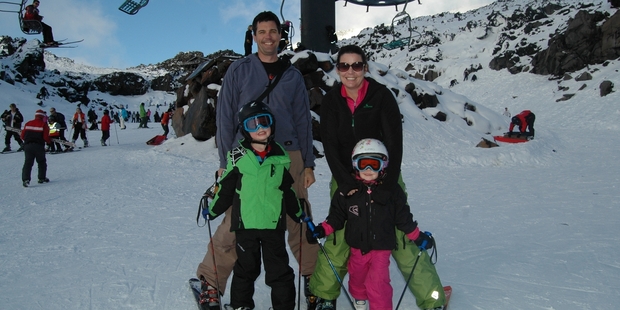 She’s only 4 but Georgia Neilson has already had her first skiing lesson.

The pint-sized Sydney preschooler wanted to keep up with older brother James, 6, who was racing through fresh snow at Mt Ruapehu yesterday with hundreds of other holidaying schoolchildren.

Mum Suzie Neilson grew up in Ohakune and though she and husband Cameron moved the family to Australia last year Mrs Neilson said she wanted her children to learn to ski in her hometown.

“They love it,” the 41-year-old national sales manager said. “My son is already a little gun, he’s just firing down the mountain as quickly as he can go.”

Despite getting off to a slow start with no snow until mid-last week, Mrs Neilson said the weather and conditions were perfect yesterday.

“It’s such great family time. We’ve just had the most amazing family holiday. The snow came late but wow, it’s been worth it.”

Skiers flocked to Mt Ruapehu on the weekend after last week’s wintry blast over the North Island brought enough snow to open the mountain’s beginner and intermediate slopes.

The snowy blanket which dumped down from Wednesday allowed Whakapapa and Turoa to crank into gear just in time for the start of the school holidays on Saturday.

Mt Ruapehu customer relations manager Annah Dowsett said there was a buzz in the atmosphere as families arrived at the mountain to clear, blue-sky conditions.

“There’s been a bit of a wave this afternoon as people arrive in the district for the school holidays.

“And they’ve arrived to an open mountain with snow which is fantastic, blue skies and a great weather forecast for the next few days.”

Beginner zone Happy Valley and the Centennial chair lift for intermediate skiers was open at Whakapapa on the northern side of the mountain.

At Turoa on the southern side, the Alpine Meadow Platter beginners area and Parklane, Movenpick and Giant chair lifts were open for skiing.

“We are working on further facilities and trails and they are evolving as each day passes. We can assess it daily.

“Conditions are great for snow making so if we can make snow and keep building additional trails we will.”

She said many visitors were there for the holidays. Mt Ruapehu staff were anticipating more upper mountain facilities for skiing and snowboarding to open from today.

“We’re constantly working around the clock to get things more open. We’re pretty optimistic that the Valley T-bar will be open for operation this week.”

She hoped the Knoll Ridge T-bar and the Waterfall T-bar at Whakapapa would also open later this week while the Waterfall Express chair lift was operating only for sightseeing.

“We are working on further facilities and trails and they are evolving as each day passes. We can assess it daily.