Home > News > Freezing conditions over most of NZ...

Freezing conditions over most of NZ 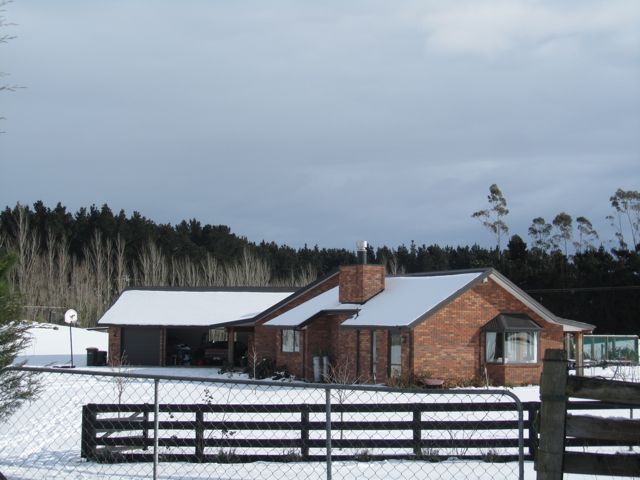 Thermometers across the country are struggling to push above freezing in many areas first thing this morning and almost all of the country should remain in single figures today as the bitter southerly outbreak roars on.

Overnight snow fell over parts of both islands and New Plymouth has seen snow and places such as Stratford have received a big dump.

Snow has moved into numerous centres over the lower North Island and has also moved into Ashburton and Timaru in Canterbury with more falls expected and a chance of heavier snow likely.

Transport issues are continuing to occur with police advising people to stay off the roads in worst affected areas.

Overnight the winds also started to rise with gales reported at numerous locations and are expected to continue throughout much of today.

“As we said yesterday the snow appears to be coming in waves and on occasions it’s blizzard like” says Weather Anayst Richard Green.” It doesn’t look like much of a let up is coming for those at the forefront of this southerly and the wind is incredibly cold” Richard Green says.

Snow has been reported in areas that have rarely seen it in recent memory, especially in the North Island.
For some it’s a curse , for others there it’s pure joy. Some comments from our readers earlier this morning…” I’ve never seen snow and this is incredible” says Amy Henderson near Palmerston North.” The kids are out in it and it’s only 6 o’clock but what the heck” says Sandy Knowler of New Plymouth.

Temperatures across the nation as expected are very low and in southern and eastern areas it’s expected to remain that way for quite some time yet.Wellington, Christchurch and Dunedin should struggle to get much past 5 degrees if at all and the wind will make it feel closer to zero for much of the day.

The polar outbreak is still likely to roll on as pulses of cold air and wintry conditions hammer away over much of New Zealand.

Wife just called very excited its snowing in Pukekohe. We live about 80m above sea level there. Quite amazing. Also had a work collegue say that his wife had called and it was snowing in Maraetai. Now that may be a first!

A couple of snow flurries here in Tokoroa this morning.  Pity it didn’t settle, but was awesome to watch  the flakes falling.  This old gal has never seen snow falling before so it was a thrill.  Hoping for more….

I see Tokoroa has moved up on the snow lists you provide so who knows, nature just might surprise us.  Btw – Thanks for the awesome reports ‘weatherwatch’ has, they are great.

a few cm on coating on cars/rooves in Feidling this morning.

None in Palmerston North itself, but little bits right on the outskirts.

Alson 8cm reported in Halcombe, about 10km from Feilding.

Thanks Luke and appreciate your update 🙂

Have been up watching the snow since 3am, has let up occaisionally, looking at around 10cm. Will it get heavier? Will it break or continue right through?

Depends where you are but east and south is likely especially over South Island.