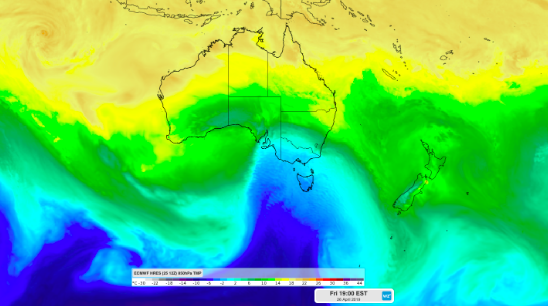 The front, which is crossing Australia’s southeastern states on Friday, is ushering in a large pool of cold air from the Southern Ocean.

This frigid air mass is causing temperatures to plummet, allowing snow to reach about 700 metres above sea level in Tasmania during Friday.

The cold air will also be accompanied by blustery southwesterly winds and a large and powerful swell in the wake of the front.

At 8:30am, Hobart’s 10 degrees was feeling more like zero degrees due to wind chill, as gusts reached 76 km/h. Unsurprisingly, there was snow on Mount Wellington this morning, where wind gusts above 100km/h made -2 degrees feel like -20 degrees at 9am.

Wind gusts reached up to 135km/h at Tasmania’s Maatsuyker Island and 96km/h at Cape Bruny on Friday morning, prompting a severe weather warning for parts of Tasmania.

Large waves have also been battering Tasmania’s west coast on Friday morning, where maximum wave heights reached 13.6 metres off Cape Sorell at 8:30am. Further west, waves were hitting 8.0 metres near Kangaroo Island in South Australia around the same time.

The large surf has arrived in time for the Rip Curl Pro surfing compeition at Bells Beach on Victoria’s Surf Coast.

Cold air will spread across Victoria and into NSW during Friday and Saturday morning as the front moves further north.

Showers, storms and small hail are possible in southern Victoria on Friday, while snow could fall in the alps above about 1,300 metres from the afternoon.

After two consecutive weeks of temperatures reaching the mid-to-high twenties, Sydney is forecast to reach a top of 19 degrees on Saturday. This would be the city’s first day below 20 degrees so far this year.

The swell affecting parts of Australia’s south coast today will spread north along the NSW coast on Saturday. A hazardous surf warning has been issued between Ulladulla and South West Rocks, including Sydney and Newcastle.

NZ WILL BE AFFECTED TOO
The cold blast will also reach New Zealand late on Sunday and across Monday with wintry conditions in both islands for a time. It will be short lived though, with high pressure moving on Tuesday and by Wednesday and Thursday warmer northerly quarter winds develop again.

Are we likely to get more of this stormy weather in May. Hoping for good weather when we sail out of NZ later in May.

Hi there – May can be a very changeble month with warm days and sudden wintry blasts. We can also sometimes get a tropical storm. The pattern this year shows some large highs coming in though, so there will be windows of opportunity. All the best!