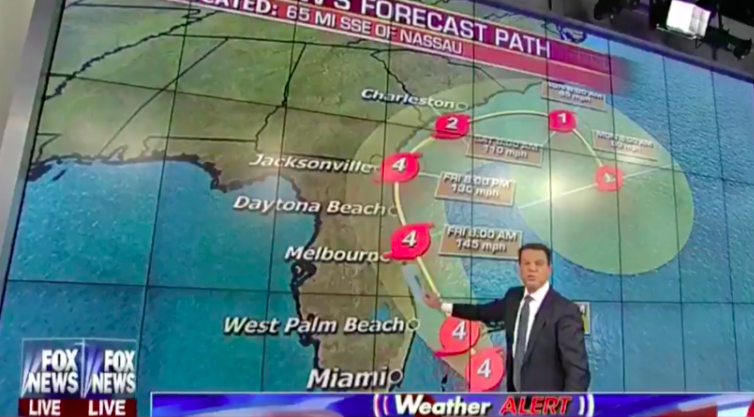 A US news presenter has been slammed for a strongly worded weather warning that advised viewers “you and everyone you know will die” as Hurricane Matthew battered the country’s south-east coast.

Fox News anchor Shepard Smith did not mince his words when he advised Florida residents to evacuate .

Smith called those who are boarding up their homes and refusing to evacuate “moronic”.

“We will not cover your funerals, we will not feel sorry for you,” he said.

“The storm will wash homes away and leave anyone inside to die a violent death.

“This is not to scare you, it’s to remind you what happened when Hurricane Katrina hit the Mississippi coast.”

However many have attacked Smith for using scare tactics on viewers and called his warnings “hysterical”.

“You’re a disgusting person for your comments about people and their children dying. You need to be fired and never be on TV,” said another.

But others have praised him for his blunt delivery, saying people need to be shocked in order to take the situation seriously.

“I’m actually starting to like how Shephard Smith’s bring brutally honest about the hurricane. Some people are way too stubborn,” said a social media user.

“You did good Mr Smith. Sometimes plain speaking is what folks need,” said another.

Hurricane Matthew is the most powerful storm to hit the US in more than a decade, the last being Hurricane Wilma in 2005.