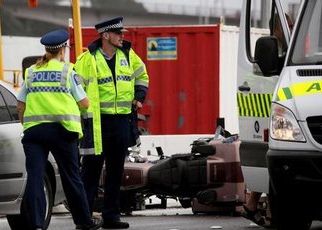 A young mum was killed when her car rolled yesterday, but her two children survived unscathed in the back seat. She was one of four people to die in a treacherous day on the roads, as wind and rain played havoc.

Traffic was stopped on the Auckland Harbour Bridge after a motorcyclist crashed in heavy traffic. He was taken to hospital with moderate injuries.

Another person was moderately injured when a car hit a tree in the Auckland suburb of New Lynn.

Further south in more severe weather, the crashes were more serious. Stratford mother Ayesha Bartle, 30, died after her car rolled near the Mangawhero Bridge, south of Raetihi at 9.30am.

Police said her two children, aged 2 and 8, were in child restraints in the back seat. They escaped without obvious injury, but were taken by ambulance to Whanganui Hospital for checks.

In Hamilton, the 18-year-old driver died when his car hit a tree at 10.45am on Normandy Ave, a notorious accident blackspot. His passenger, aged 20, was taken to Waikato Hospital with serious injuries.

A witness, who did not wish to be named, said the car was “fully wrapped around the tree. The front of the car and the back were almost touching”.

A 19-year-old woman died in the Christchurch suburb of Bryndwr early yesterday morning when the car she was in crashed into parked cars.

A passersby desperately gave her CPR but she died a short time later. The driver had continued along the road for 200m after crashing, before stopping to check the young woman in the back seat.

One person was killed and four people were injured in a two-car crash in the Nelson suburb of Stoke last night.

And in Wellington, misty weather caused five crashes. The problems started when a car hit a barrier between Tawa and Porirua on State Highway 1 around 11.25am, causing a six-car pile-up.

Police attended another accident two hours later at almost the same spot, as well as a two-car crash on SH58, where one car was on fire, a crash in the Terrace Tunnel and one in Ngauranga Gorge.

Homepage image — Harbour Bridge traffic ground to a halt after a motorcycle and a car collided. Photo / NZPA