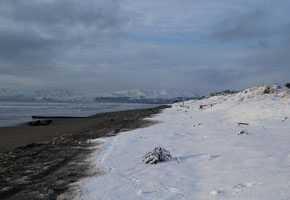 With the official start to winter just under a week away lets look at how likely snow might be when one looks at a set of weather models and or data. I’ll only cover one aspect which is fairly straight forward and hopefully most will be able to understand this simple way of looking at a chart. It isn’t the only way by any means and there can be other factors involved. So…. without further adieu.

I’m going to cover “thickness” levels here. Basically thickness levels are a measure of how warm or cold a layer of the atmosphere is, usually a layer in the lowest 5 km of the troposphere; high values mean warm air, and low values mean cold air. Here is a link to charts of thickness levels over Australia and New Zealand. Can you see the blue dashed lines? They are the thickness levels, each interval is separated by a value of 4. Most will be familiar with the areas of low and high pressure on the map. See how when you click the play button the maps animate, at the same time you can see due to the thickness lines where cold air is in the atmosphere and where it is moving. High thickness levels are 540 to 550 and above, meaning warm air. Levels below that represent areas of colder air.

Generally speaking you will see these pools of cold air coming up from Antarctica in associated southerly or southwesterly airflows with a low over New Zealand or to the east, and an anticyclone ridging quite far to the south out to the west of the country. You will need an associated front or trough of course to be in the mix to provide the clouds for it to snow, sometimes cold pools of air can lag within a flow after a front has moved on and while thickness values may be low if there are no clouds to produce any snow then it won’t happen.

So there you have it. One way to perhaps give you an idea if snow might be on the way.

People are going to get so confused between thickness and altitude….