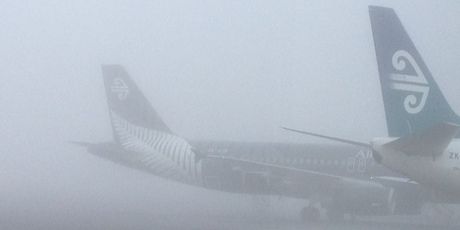 As WeatherWatch.co.nz first alerted to on our Facebook page two hours ago, fog continues to affect flights in and out of Auckland domestic airport this morning.

As of 9:15am 43 flights were either cancelled or delayed in the domestic terminal according to Auckland Airport’s website – most of those cancelled rather than delayed.

WeatherWatch.co.nz says the fog is thick in places but isn’t as widespread as the major fog disruptions earlier this month.

WeatherWatch.co.nz expects the fog to linger until late morning for some areas.

Not all of Auckland is affected by fog, those suburbs that are fog free have mostly sunny skies.

While winds are currently light, an easterly breeze is predicted to develop this afternoon.

International flights are operating as usual however WeatherWatch.co.nz advises all air travellers nationwide to check airline and airport websites before travelling today with airports across New Zealand affected by Auckland’s disruptions.

Hanging above Astley Avenue & Golf Road as is comes through the Manukau Heads. Green Bay will be smothered.