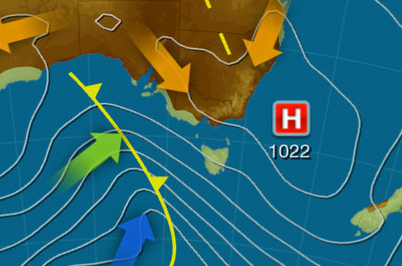 Large areas of southern Australia can expect a foggy start to the next few mornings, reducing visibility for the first few hours, even in the southeastern capitals.

A broad high pressure system combined with moist air will contribute to widespread low cloud and fog in all southern states, the ACT, New South Wales and southeast Queensland.

The high is maintaining humid sea breezes and gentle early-morning winds from Albany in Western Australia to Tasmania to eastern Victoria to Queensland’s Sunshine Coast.

The sea breezes are relatively humid for this time of year with the aid of warmer-than average seas from where they blow. Gentle overnight-and-early-morning winds are allowing land areas to readily cool down, encouraging the moist air to condense into fog and low cloud.

On Saturday morning visibility dropped to about 100 metres in Albany, Shepparton, Goulburn and Armidale, about 200 metres in Canberra and Wangaratta and about 300 metres in Launceston.

On Sunday morning, low visibility from fog and low cloud should affect these areas and the surrounds due to a slow-moving weather pattern. Visibility will again become poor enough to slow and delay travel.

Parts of Adelaide, Melbourne, Canberra and Sydney are also a good chance to be affected.

Similar to the last few days, fog will lift during the morning but low cloud will linger for much of the day, maintaining a gloomy feel into the afternoon.

Fog will redevelop on Monday morning in some of the same areas but becomes less of a risk in SA and Tasmania due wind increasing wind.

A gusty cold front will reduce the fog risk further during the following few days, although easing wind and clearing skies later in the week could allow fog to reform.