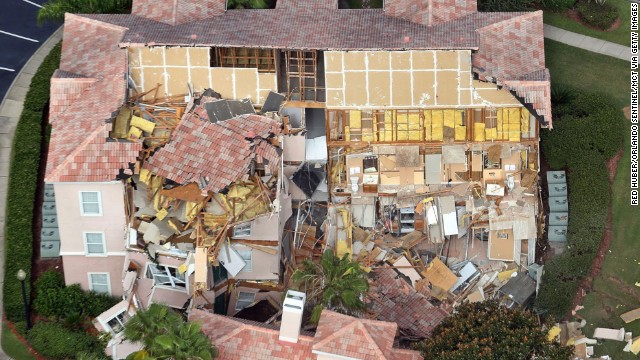 A 60-foot-wide sinkhole formed under a resort in central Florida late Sunday, forcing guests out of their rooms as one three-story building collapsed and another slowly sank.

Guests at the Summer Bay Resort in Clermont, about 10 minutes from Walt Disney World, called for help before the collapse, saying they heard loud noises and windows cracking. All guests inside the buildings — an estimated 35 people, authorities said — were evacuated before the first structure crumbled.

Sinkhole eating family out of house and home 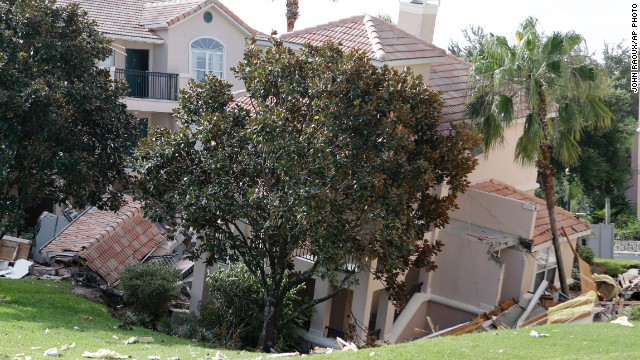 A roughly 15-foot-deep crater swallowed much of one building, Lake County Fire Rescue Battalion Chief Tony Cuellar said. Aerial video from CNN affiliate WFTV showed one end of the building — which had held two-bedroom, two-bathroom villas — still standing, but the rest reduced to a pile of debris.gives way

The evacuation started after 10:30 p.m., when a guest told a security guard about a “window blowing out,” said resort president Paul Caldwell.

After another window broke in the guard’s presence, the guard called a co-worker and, together, they got everybody out.

“He estimated, I think, about 40 minutes after everyone was evacuated, the big fall came,” Caldwell said about the first guard.

“His quick thinking, in my opinion, saved lives, or limbs, or injuries,” he said.

No injuries were reported.

A couple and their infant escaped through a window because a door frame had collapsed, witness Maggie Ghamry told WFTV.

“He, his wife and an infant, he had to break the window so they could escape,” Ghamry told WFTV. “There were windows breaking everywhere.

“One woman was sitting in the tub, and the tub levitated, and that’s when she just grabbed a pair of shorts and came out with nothing.”

That woman wasn’t the only one to leave belongings behind. Other guests left keys and bags in their rooms, and it wasn’t clear Monday whether guests would be able to get items back from parts of the collapsed building, Caldwell said.

The resort has made other rooms available to all of the affected guests.

“Those items … to be very bluntly, realistic — may never be retrieved,” Caldwell said. “They are not going to let us in there to go get stuff for people.” 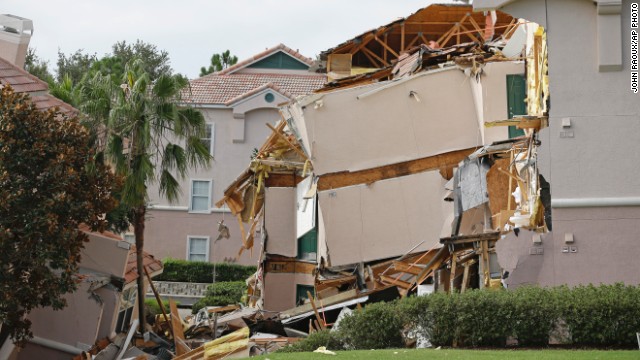 Florida is notorious for mammoth sinkholes. In February, a sinkhole opened beneath a suburban Tampa home, swallowing 36-year-old Jeff Bush from his bedroom. Bush’s body was never recovered.

Sinkholes often start when bedrock dissolves but the surface of the ground stays intact. The void eventually collapses.

Living with a sinkhole under your home