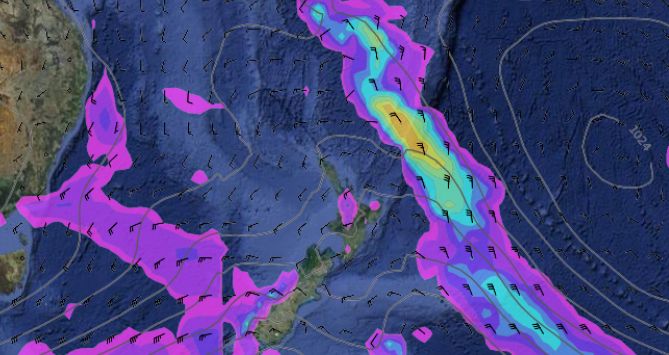 Roads were closed, farms flooded and homes evacuated as heavy rain hammered much of New Zealand yesterday and overnight.

Two people were injured, one seriously, when a tree fell on their car at Cooks Beach on the Coromandel Peninsula about 5pm yesterday.

Fire officers helped to pull them from the wreckage and they were taken to Thames Hospital.

In Northland, many roads – including the main link between Kaeo and Kaitaia – were closed by flooding, and many farms were under water.

One WeatherWatch follower said flooding had closed State Highway 1 west of the Bay of Islands, causing problems for her husband and farmers.

“SH1 at base of Mangamukas is closed at the bridge north of Okaihau. Hubby is stranded there. No one is getting through,” she wrote.

There were also reports of flooding from Helensville, Miranda and parts of Waikato, although it did not appear to have caused any serious damage.

But in the Bay of Plenty, authorities were keeping a close eye on rivers and drainage last night, and work crews were on standby.

Rotorua-region lakes were at maximum levels, and a heavy-rain warning was issued for Tongariro National Park, eastern Bay of Plenty, northern Gisborne and parts of Northland.

Farmers were being warned to move stock to higher ground.

They included a nose-to-tail on Auckland’s Northwestern Motorway and a four-vehicle pile-up on the Southern Motorway.

A Fire Service communications spokeswoman said about a dozen weather-related incidents had been reported. They included roofs lifting and leaking, toppled trees, and flooding in the upper North Island.

One of the worst-hit areas was the upper South Island, where at least 10 homes were evacuated yesterday morning because of rising streams.

Several roads in Nelson, Tasman and Marlborough were closed by slips, and at least one was on the brink of collapse.

Nelson couple Stephen and Sandie Burn said they were woken at 5am yesterday by a group of boys who told them the entire front section of their hillside property had slipped on to the street below.

“We looked down and couldn’t see the driveway – there was just mud everywhere,” Mrs Burn told the Herald.

The couple could only sit yesterday morning and watch as two diggers cleared away the “porridge-like” mud that flowed beneath their home and damaged their family room.

The couple have been told their dwelling is not safe, and last night they stayed in a hotel.

“It’s a bit of a shock but I haven’t felt anything yet,” said Mrs Burn. “My husband and I are just working through it, and we’ve got too much to do and to organise at the moment.”

The good news is the worst of the rain has passed and while there will be showers today, the weather is expected to improve for the weekend.

“It’s looking like conditions are definitely going to improve on Saturday, and Sunday looks spectacular, as does much of next week,” said WeatherWatch.co.nz head analyst Philip Duncan.

A Niwa official said the wild weather was not a prelude to an even worse winter but the swansong of a fading La Nina weather pattern.

Climate scientist Jim Renwick said he expected winter temperatures would return to normal with the ending of La Nina, which had been playing with New Zealand’s climate since it arrived last spring.

“This month, we’ve had a lot of wind and warm air coming from the north and bringing quite a bit of moisture to places exposed to the north, like Bay of Plenty, Northland and Nelson.

“We don’t have an outlook for winter yet but a lot of it is driven by the La Nina event in the tropics.

“That’s pretty much petering out now and the expectation is that winter will be pretty normal.”

TODAY: Rain or showers for most of the country clearing throughout the day.

SUNDAY: Mainly fine for most of the country.