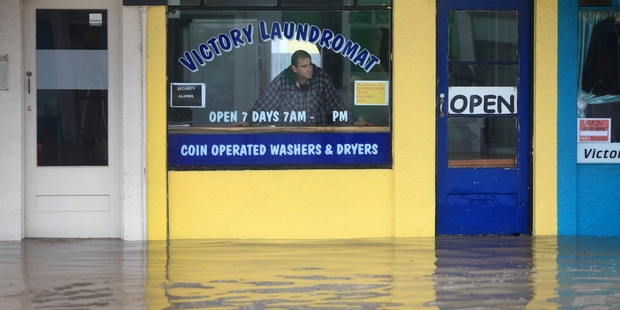 Some Nelson streets were flooded yesterday and muddy water washed through a number of homes.

Civil Defence said families in the Victory area were warned they may have to leave their homes until surface flooding receded. Wellington was hit by strong winds, with gusts reaching 90km/h in Kelburn. Rain had cleared in the capital by mid-afternoon, a government spokesman said.

Rain warnings were in place for Taranaki, and 100mm of rain was expected in the mountain ranges tonight, especially around the higher slopes.

A helicopter water drop is planned for a man kayaking from Australia to New Zealand at first light today.

He was 275 nautical miles from New Plymouth yesterday morning.

The low’s warm air was not expected to deliver much-needed snow to the skifields.

Some snow was likely on both islands, although no wintry blast was forecast at this stage, apart from a southerly change in the first week of July.

The opening of Whakapapa and Turoa skifields had been put off “until Mother Nature allows” which was expected to be at least a week, according to Mt Ruapehu spokeswoman Annah Dowsett.

After suffering widespread flooding yesterday, the Nelson region can look forward to a reprieve from the rain.

The latest weather data showed the region was set to fine up as the day progressed.

“They might get a few showers this evening, but it’s not going to be anything major really.”

The Civil Defence Centre activated yesterday afternoon by Nelson Tasman Civil Defence Emergency Management in response to flooding in the Victory area of Nelson has now been stood down. The flood waters have receded to the point where immediate help is no longer required, Civil Defence said.

Drivers in the region were reminded to take extra care as road conditions were not ideal. Contractors were continuing to clear remaining debris from the affected roads.

The front which brought widespread rain to most of the country yesterday was now hanging over the East Cape of the North Island.

Feilding got a wee bit of rain last night, no wind to speak of… this morning calm fine, blue skies shining on us, few clouds but its a cracker day so far the washing drying – so where is the storm?

The rest of the country never really was in for much of a major storm, was more a typical frontal system moving in from the northwest with a preceding north to northeasterly airflow.

It was this airflow that got caught in Tasman Bay however, it acts like a funnel increasing the intisity of rain in this area.