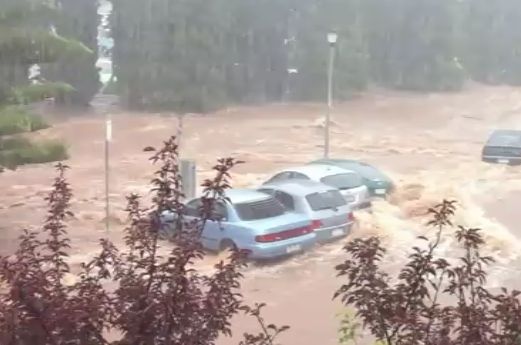 Flooding has left a valley to the west of Brisbane looking like a war zone with Australian troops steeling themselves for expected ‘terrible outcomes’ as they move into the devastated area.

In one small town at least 30 cars have been washed up against a bridge, prompting fears they could contain the bodies of many victims.

The official death toll is now at 13, after a body was found in a field near the town of Grantham, Queensland premier Anna Bligh said at a press conference this morning, about 1pm NZT.

All of the 13 confirmed deaths in this week’s floods were in the Lockyer Valley and the nearby cities of Toowoomba and Ipswich.

Five deaths were in or near the small town of Grantham, which has a population of about 370.

The toll is likely to rise further, with authorities holding grave fears for 12 people, most of them from two families, who are still missing in the devastated valley community of Murphys Creek. A further 74 are reported missing.

He is “sure” more will be found as search and rescue teams move into previously inaccessible areas.

“We have to brace ourselves for more bad news.”

Earlier, he told the Nine Network: “Unfortunately, the sheer scale of this disaster in the Murphys Creek area would suggest to us that the people who are missing there – and there are two families who account for most of those 11 – they have not been located.

“We hope we can determine what has happened to them today.”

Ms Bligh broke down as she spoke to reporters about the flooding that has devastated whole communities at this morning’s press conference.

“This is the worst disaster in this state’s and possibly the nation’s history,” she said.

Lockyer Valley west of Brisbane has been ravaged by the floods, with the extent of devastation only now becoming apparent, she said.

“This is a valley that has been completely and utterly devastated.

“There are whole towns that are completely unrecognisable.”

Mr Stewart said searches were also continuing in Grantham and the town of Withcott.

“The problem we have is that the people have been washed out of their homes and some of the homes are actually destroyed, like bombs have gone off there,” Mr Stewart said.

“It’s a war scene in the Lockyer Valley today.”

Defence Minister Stephen Smith said troops would be steeling themselves for “terrible outcomes” as they moved into the valley.

“We’ll announce further contribution of high wheel-based army trucks which can get better access in difficult conditions. Also, a deployment of Bushmaster (armoured transport) vehicles for the same purpose,” he told ABC Radio.

“But we’re also looking at providing a small number of amphibious vehicles who can manoeuvre in the floodwaters, particularly as the floodwaters start to recede, but where vehicle access remains very difficult.”

Police working in the area yesterday described scenes of heartbreak and devastation.

One officer in the valley said the task of recovering the dead was “simply horrific”.

“We are searching for in excess of 30 people and at this stage we are in a body-recovery phase,” a police spokesman said.

“We are recovering numerous bodies from the river and are prepared to recover many more.”

“The scene behind me is one of complete horror; it is heartbreaking for all of us who are involved.”

The Herald Sun reported that police feared rescuers would find a mass underwater grave in the town of Grantham.

Yesterday, residents were walking around ruined streets, some unable to speak of the horror.

Beneath a railway bridge in the town, up to 30 crumbled cars lie piled up after being washed down stream.

“You’d have to think with 30-odd cars here, we’re about to find some pretty unpleasant things,” the newspaper quoted an officer as saying.

“I know there is a body in that white car – it’s a mother who my husband couldn’t get to,” a resident, Karen, told the paper. “He got her daughter off the roof but he couldn’t get to the mum.”

One survivor told how he watched as houses were uprooted and people were tossed around in the surging torrent as he clung to his roof for survival.

Martin Warburton said he tried to grab what he thought were people fighting for their lives – only to realise they were dead and their bodies were being tossed around by the waters.