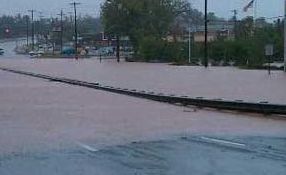 NZHerald.co.nz – Heavy rain on the east coast of the North Island has left Gisborne virtually cut off, with surface flooding closing roads and forcing the evacuation of homes.

Tangoio, due to flooding, meaning the east coast city is only accessible via SH38 through Te Urewera National Park, or SH35 around the coast to the north, although a large slip has blocked one lane of SH35 on Hospital Hill at Te Araroa. SH5 from Taupo has also been hit by surface flooding, but remains open.

Several roads were closed at Tolaga Bay and in Ngatapa Valley, and more were expected to shut if the rain continued at the same level.

Heavy downpours yesterday prompted the evacuation of a handful of households, and forced the closure of rural schools and left dozens of homes without power.

Gisborne Civil Defence Controller Jon Davies said although the rain had eased and moved south, rivers remained high and would take some time to fall.

A number of households north of Tolaga Bay were evacuated yesterday as the Hikuwai River north of the township crept close to 12m from a base level of 2m.

The river rose to 12.4m overnight, but no houses flooded.

“It’s teased us. It’s got right up to where it could cause critical damage and then has left it, so a good outcome,” Mr Davies said.

More than two dozen evacuees would be able to return to their homes today.

Meanwhile, dozens of homes were left without power and rural schools had to be closed.

Brent Stewart the general manager of energy at Eastlands Network said there were about 12 to homes still without power this morning in remote areas, including Hicks Bay, Tauwhareparae near Tolaga Bay, and Cricklewood near Wairoa.

“Some of those only lost their power this morning,” Mr Stewart said. “There have been issues getting to those places because of flooding on the roads.”

The Hikuwai River at Willow Flat reached 12.4m to lap the State Highway but, with a close eye on the river receding to the road’s edge, contractors managed traffic to pass through.

Waerenga o kuri received the highest rainfall with 306mm in the past 30 hours. Areas north and inland of Tolaga Bay and Tokomaru Bay received more than 250mm, and area close to the city had more than 200mm.

Mr Davies said a number of people had got into trouble trying to drive through flooded rural roads.

At least two people needed help to escape from vehicles, while there were a couple of minor accidents due to flooding.

“It was a wake-up call. We put out warnings about the danger of surface flooding, but we still have a number of cars ending up driving into surface water,” he said.

The surface flooding had come at a bad time for farmers, with a lot of new crops being planted.

“That water will be sitting there for a little while before it’s actually able to drain away.”

It was too soon to say how much damage had been done.

Within the city, floodwaters came across Thomson Street near the Botanical Gardens next to the Taruheru River, and also into Ferguson Drive properties.

“This is the first time we have seen water across Thomson Street probably since Cyclone Bola,” Mr Davies said. “Waters from the Waimata River also broached Anzac Park. Properties in Ferguson Drive had water in their back yards.”

Flooding had also hit the Gisborne Showgrounds site, where the annual Agricultural and Pastoral show would get off to a “soggy start” tonight.

“Most of the empty marquees had a floor of water that has to be got rid of today so they can prepare for the show,” Mr Davies said.

“I have no doubt that they will cope. They’ve got better weather today and a chance to pump it out. They’ll be resilient and get it done.”

The Gisborne Fire Service would pump out floodwater today.

About 250mm of rain fell north of Gisborne in the past 24 hours, with up to 300mm in some areas west of the city.

MetService forecaster Gerard Barrow said there would still be heavy rains in Gisborne today and also the possibility of thunderstorms in the area.

“At this stage the heaviest rains are going to ease by [today] but there will be showers in the afternoon and possibly some thunderstorms in isolated areas,” Mr Barrow said.

A temperature high of 17C is expected in the region today, with a low of 8C.

Police central communications said they had received several weather-related calls, but nothing serious.

“Right now there is still a lot of flooding and so people should be driving to the conditions.”