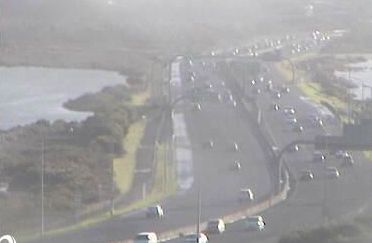 High tides are forecast for Auckland’s harbours in the coming week, prompting a warning for people using the city’s motorways.

The NZTA says the unusually high tides for Manukau and Waitemata Harbours from Monday will have the potential to flood low-lying sections of the roading network.

State Highways manager Tommy Parker says the area most likely to be impacted is sections of the road and cycleway on the Northwestern Motorway between the Waterview Interchange and Rosebank Road.

The NZTA is planning to raise the causeway by 1.5 metres and increase the width of the motorway to provide extra lanes as part of the project to complete construction of the Western Ring Route.

one thing to note for the Manukau was that the predicted high tide is for 4.1m today and tomorrow
thats a normal King tide (a spring tide is like 4.5m).
but, with the big 4.5m W swells pushing into the harbour entrance coupled with the gale onshore winds, the tide was actually more like a Spring tide of 4.4m from what I could see on the harbour beaches this morning

A good day for some photos maybe at high tide!

What happened to todays storm that Metservice provided for Northland south.
Sure Wellington got it but not Auckland as stated.
680km difference between there and here.
Someone needs to take a look at what there doing

680km from Auckland puts you in Canterbury!

The weather doesn’t travel by road 🙂

In fact it’s probably several metres at the top there!  We’ve updated this story which came via NewstalkZB – and have let ZB know too!