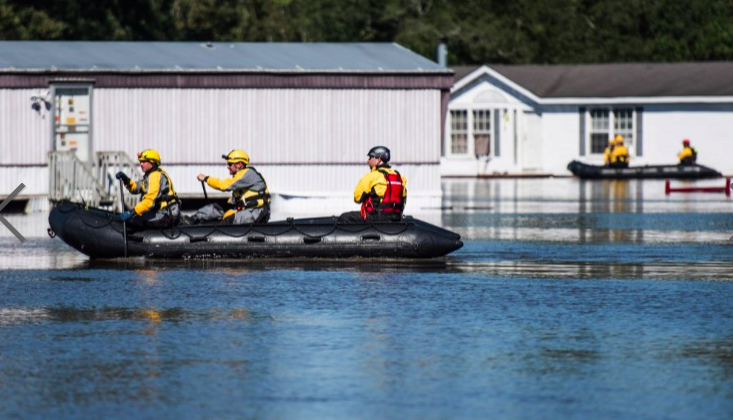 The weather is picture-perfect nearly a week after Hurricane Matthew unleashed winds and torrential rain on North Carolina’s eastern flatlands — but Princeville still is under water.

“This is a disaster area. It’s not going to recover in 24 hours, and it’s still going on as we speak, not only in Princeville but 150 miles from here,” Gov. Pat McCrory said.
“People are playing golf 20 miles from here, and yet we have a whole town under water.”
The aftermath of Matthew’s deluge has caused normally tranquil rivers to swell to record levels. Princeville, a town settled by freed slaves in the late 1800s, is among the most severely hit.
Every road into the town, about 120kms east of Raleigh, is off-limits, and officials said most of the 2,000 residents evacuated days ago. Many took shelter across the Tar River in Tarboro.

Twenty-six people have died in the state due to Matthew and the resulting flooding, McCrory said Saturday, raising the US death toll from the storm to 37.

McCrory was cautious Friday about any immediate hope he could offer displaced residents.

“You are going to have to be patient, I’m not going to sugarcoat the situation. I don’t want to over-promise, but in the long term we want to get their lives back to normal. In the short term we want to get them into safe, reliable housing,” he said.
“The lesson learned from this is … I am going to recommend federal legislation which changes the categories of hurricanes because, when the Category 4 was dropped to a Category 1, the headlines were that everything (was) OK.
“We need to look at these classifications because the current classifications mislead. It has to include water, not just wind,” he said.
In towns all over eastern North Carolina people of all ages are suffering. Not knowing if their homes made it, they are weary and worried.
“It’s a little tough, but even in the midst of the storm you still have to smile, you still have to go on,” said Wilkins, talking outside the Tarboro shelter under a cloudless, blue sky.
– Image / CNN, Getty – view more Flood Images & the Hurricane Matthew history – plus read more of this story by clicking here & visiting CNN
– CNN.com