Home > News > Flies are having a field day this summer...

Flies are having a field day this summer 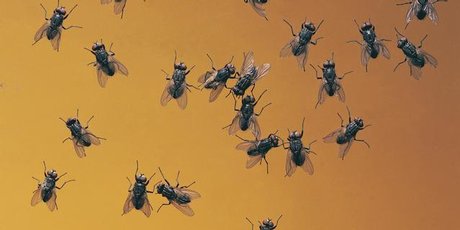 Infestations of flies are plaguing householders as temperatures slowly start to climb.
Mid-20C temperatures and moist conditions have caused a proliferation of household flies, which thrive and reproduce more quickly in a sticky climate.
One Auckland fast food restaurant has had to close intermittently after customers complained to the council that it was overrun by the pests.
Weatherwatch head analyst Philip Duncan said Auckland had not reached the stifling mugginess of last February, but humidity had still been a factor at the beginning of this year.
He said the humidity had been less noticeable this summer because temperatures had rarely climbed above 25C in Auckland. The thermometer has only occasionally reached 27C, the point at which pest controllers say their fly-related callouts rapidly increase.
McDonald’s Greenlane has closed twice this year to be sprayed for flies, after customers complained of clumps of them on ceilings, chairs and tables.
Glen Miles, from Waterview, said the fourth birthday he attended with his children on Sunday was spoilt by the high numbers of flies.

“They were all over the ceiling, all over the doors, flying around, on coffee cups … hundreds of them. My wife actually swallowed one of the flies, and that’s when we realised they were everywhere.”

Restaurant assistant manager Kiran Challa said regular spraying had not fixed the fly problem, and the building would be closed again on February 12 so that large parts of the ceiling could be replaced.

Auckland Council officials had investigated the McDonald’s twice, and had been satisfied that it was safe to continue serving food.

The flies are attracted to food scraps in homes and also to humans’ sweaty hands which produce an acid they need. One inner-city dweller said fruit flies were camping out in his kitchen as if it was a holiday camp, but a good glug of bleach down the drainpipes and some 24-hour spray had sorted out their numbers.

No problems with flies down here, come to Dunedin to enjoy a pest free lunch!

Would the same humid weather that the flies enjoy, also attract ants to go indoors? because this summer, there has been a constant flow of ants, coming out of the ceiling raiding the kitchen 24/7.

Plenty of flies and rats & seagulls about Rata St, near the intersection of Great north Road. Rubbish spread about for all to look at while driving past. Delta Avenue not much better for rubbish. Lack of rubbish collections not helping too.

And all this time I had been blaming our slightly whiffy old dog.