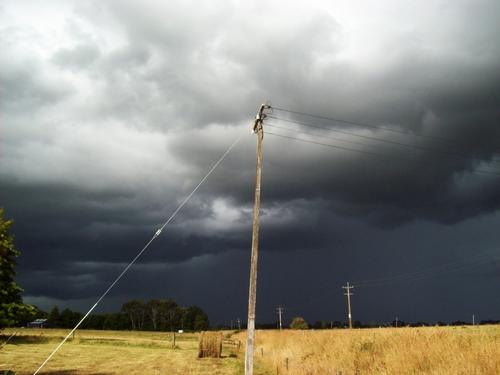 Weather forecasters are monitoring a large area of unstable air which will cross the upper half of the North Island on Thursday says WeatherWatch.co.nz.

Afternoon heating coupled with high humidity is likely to produce some big cloud build ups across the day and possibly into early Friday.

WeatherWatch.co.nz believes the chances of thunderstorms is slightly greater than on Tuesday but that showers may be more isolated.

But the main concern is with heavy downpours, which aren’t always accompanied by thunder.

Following this afternoon’s dramatic waterspout in Auckland which passed right through one of the busiest boating areas in New Zealand WeatherWatch.co.nz says there is the risk again on Thursday and Friday of further funnel clouds which could lead to small scale tornadoes or waterspouts, but WeatherWatch.co.nz stresses any formation would likely be isolated.

Head weather analyst Philip Duncan says the rainfall rates will be high enough to cause surface and flash flooding.  “If the conditions are right we can expect muggy weather on Thursday afternoon which will lead to some very big cloud build ups – these afternoon and evening showers may have torrential rainfall rates which can see drains and small creeks turn into raging torrents in a matter of minutes”.

Mr Duncan says people should be vigilant of the cloud build ups tomorrow but points out they should be isolated so not all areas will have them.  “The general risk zone is over the central and upper North Island – mostly through inland areas like Waikato and Northland but also include neighbouring regions such as Auckland, Coromandel, Bay of Plenty and Central Plateau”.

The government forecaster MetService agrees and goes one step further, predicting a moderate risk for Severe Thunderstorms for an area that goes roughly from the Hauraki Gulf southwards through inland Waikato and to Rotorua.  Surrounding that area they have “high confidence” of more general thunderstorm which includes most of the inland upper North Island.

WeatherWatch.co.nz will make further predictions tomorrow when it’s clearer exactly where the cloud build ups are forming.  “As we’ve seen this week advanced predictions of thunderstorms is a tricky business over a nation like ours, so we’ll take another look on Thursday morning and go from there”.

Settled and drier weather conditions are predicted to move into the South Island and lower North Island on Thursday with the thunder risk for northern New Zealand fading on Friday.