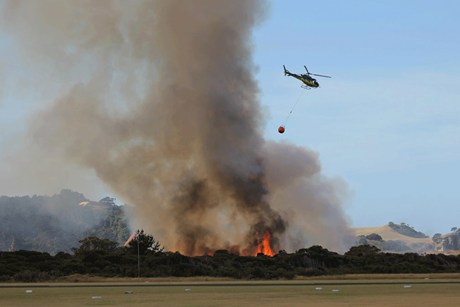 With very warm and dry conditions continuing this week fire bans are being put in place over different parts of the country.

Just before last weekend Auckland was placed under a total fire ban for the first time ever and also another populated area is also in the mix with Waimakariri and Selwyn Districts in Canterbury under the same ban.

Last week a scrub fire got out of hand in West Melton and this was on top of recent fires in the area which remains extremely dry.

The Far North is now also entering a fire ban phase and the Manawatu is also on the verge of declaring one.
The Northern Rural Fire Authority’s decision to declare a prohibited fire season says it ban most fires apart from gas bbq’s and  special permits for hangi fires may be considered.

A prohibited fire season was already in force in the fire-prone Aupouri and Karikari peninsulas, but in the rest of the Far North fires had still been allowed as long as a permit was granted. The fire ban means no new permits will be issued.

Parts of North Otago are tinder dry as well as are other eastern areas of both islands.

The bans generally include cooking fires which are barbeques with charcoal, also banned are fireworks and bonfires. Fires of any sort even with permits are now forbidden in most banned regions.

Next week could see some respite in the north but eastern areas at this point are  likely to remain mostly dry.

Only 1 mm of rain recorded here in Matua Tauranga. for January

That’s incredibly dry and thanks for letting us know 🙂