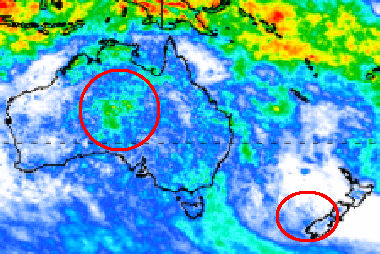 Fiordland – one of the wettest places on earth – has had less rain that desert parts of central Australia over the past 30 days.

While New Zealand has been stuck under high pressure for much of the past month many inland, southern and eastern parts of Australia have been much wetter than average.

Fiordland averages between 14 and 18 metres of rain a year (depending on elevation). Most main centres in New Zealand get around 1 metre give or take 300mm. Some parts of the West Coast just had over 3 weeks with not a drop of rain due to the stubborn block of high pressure – while at the same time parts of Australia were flooded. Areas around Alice Springs are blooming with life thanks to the rare early summer deluges.

Thankfully this past weekend the Fiordland National Park rain forest had a decent deluge.

More wet weather is coming for Fiordland, but as you can see from the second map at the bottom of the page much of New Zealand remains drier than average for the next 7 days ahead – despite the drizzle and downpours that will be popping up.

WeatherWatch.co.nz still sees no end in sight for this particularly dry weather pattern around New Zealand, but the daytime downpours will be bringing hit and miss pockets of relief to some.

High pressure may dominate in the New Zealand are until the end of December – but we do expect showers and downpours in the mix. 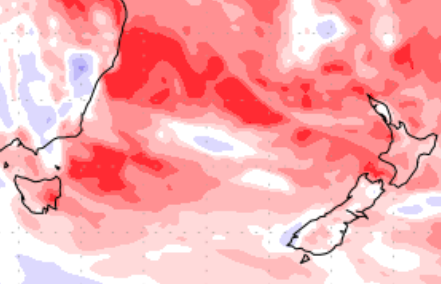 – FORECAST RAINFALL for the next 7 days in New Zealand: The darker the red shading the drier it will be. White = average rainfall. Blue = wetter than usual. (Data once again thanks to the US Government and taxpayers).