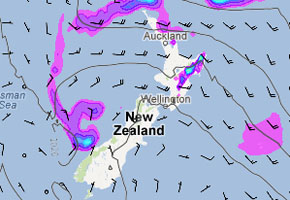 Yes finally New Zealanders should see some sun tomorrow. Mainly south of Auckland in western regions after any early showers clear, southeasterlies will remain a bit breezy during the day in our biggest city. In Northland showers could continue for much of the day as the east to southeasterly airflow there comes up and around the eastern side of the North Island. It will remain cloudy and cool on the east coast with south to southeasterly winds, expect showers although it may remain dry in the Wairarapa.

Temperatures will be cooler for most, still in the mid teens north of the Waikato / Auckland area however low double figure high’s elsewhere.

The South Island will be dry for the most part and sunny with north to northeast breezes after a frosty start, perhaps a little drizzle still in the morning around the Kaikoura coastline however it should clear with sunny breaks then increasing. Later in the day some drizzle will make it’s way into Fiordland. Temperatures remaining cool between 9 or 11 degrees, a degree or two warmer about Nelson and north of Hokitika on the West Coast.

The end of the working week and start to the weekend on Saturday looks nice weather wise as well for most however no overly warm temperatures in some areas like how it has been recently. Typical winter time high’s in the low double figure range for the South Island, low to mid teen temperatures in the north. A few showers may still affect north of Hawkes Bay along the east coast.