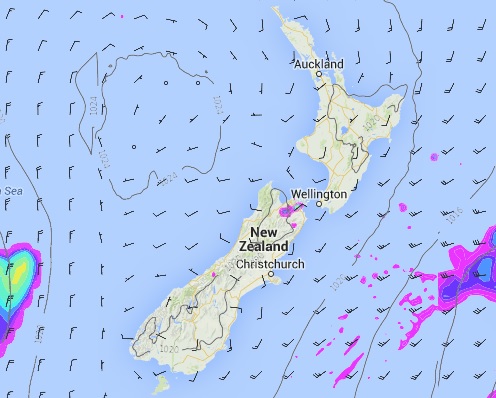 The first week of December does have a more settled outlook to it with anticyclonic conditions moving in, itâ€™s not perfect by any means but itâ€™s better then what we have been getting lately.

On Monday we still have a cool southwesterly airflow over the country, it is easing though and dies out later in the day as an anticyclone from the Tasman Sea starts to move in. Expect a few showers for most eastern parts of the South Island to clear by evening, some inland parts of the upper South Island could see unstable showers form for a time then clear later in the day while the West Coast is mostly sunny and dry.

The North Island sees southwesterlies with periods of cloud and the odd shower, in the east showers could become heavy with thunderstorms and hail in the afternoon as a southwest change moves through then easing in the evening.

On Tuesday expect mostly sunny weather across the country with light winds, there will be a few remaining showers about the east coast of the North Island which clear in the afternoon as cool southwesterlies ease there. Sheltered / inland parts of the South and North Island may wake up to a light frost so something for growers to consider.

Wednesday is mostly sunny across the country, northeasterlies freshen in eastern regions however while northwesterlies build in the west. Cloud and a few drizzle patches move onto the West Coast of the South Island around midday.

A northwesterly airflow builds across the country on Thursday, the weather on the whole is still pretty good though. Just the West Coast of the South Island is looking a bit dreary with rain on order for the day, high cloud builds in the east of the South Island. West to southwesterly winds freshen in the afternoon about Southland and Otago bringing a few showers.

Friday sees a warm front extending out from a low in the Tasman Sea stretch out over the country, this brings increasing cloud from morning and a few patchy light showers spread to most regions eventually. Rain moves onto the South Islandâ€™s West Coast later in the day. Auckland and Northland have good weather though with light winds under a ridge of high pressure.