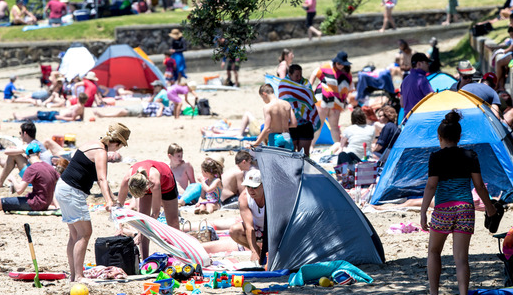 Hot, sticky weather conditions last month made for a cracker summer for much of the country and official figures show it was the second-hottest month ever recorded.

The National Institute of Water and Atmospheric Research today released its climate summary for February.

The nationwide average temperature was 19.5C, just slightly below the record 19.6C in February 1998.

The small central Otago town of Clyde took the award for being the hottest place in the country last month.

The temperature there hit 35.5C on February 3.

In contrast, the coldest day was felt in Manapouri, in Fiordland, where the temperature dropped to 1.9C on February 10.

The report said an increase in air flow from the tropics last month brought down warm and humid air leading to muggy conditions, particularly in the North Island, and hotter days in the rest of the country in general.

“The moist tropical air masses (including remnants of tropical cyclones Tatiana and Winston) that affected New Zealand in February not only brought warm temperatures and high humidity, but also significant rainfall to some parts of the country,” its report said.

Of the six main centres Auckland, Tauranga, Hamilton, Wellington, Christchurch and Dunedin the City of Sails was rated the warmest last month. Dunedin was the coolest, while Christchurch took the gong for being the driest place.

Wellington was the sunniest city and Tauranga the wettest and with the most cloudy periods.