Farmers/Growers: More rain coming, wind too – we explain the next 2 weeks

Detailed update + 3 maps, 1 Animation — A wetter than average two weeks are coming up for many New Zealand regions – plus the windy spring westerlies are finally kicking in too. Some farmers in the north have had so much rain the grass is growing fast but the lack of sun makes the grass less useful – cows are unhappy in some regions, so too are horses struggling with the wet conditions underfoot.

Meanwhile in Canterbury the drought isn’t getting any better and a change to windy westerlies is not a positive one for some growers and farmers in that region.

We have positives and negatives (and granted someones negative can be another persons positive) and we’ve broken it down for you as best as we can:

RAIN:
More rain is coming – and while that may be depressing for many it will be a “different sort of rain” says head weather analyst Philip Duncan. “September ended with La Nina-like cloudy, humid, east to north east weather across New Zealand. The change kicking in this week sees a strong westerly change – so the rain will be coming in from the opposite direction and our mountains and ranges then break this weather up so different people are affected, generally anyway”.

This means rain will affect new regions, while others that had a lot of rain and cloud last week may be sunnier and drier this week. This rule doesn’t apply to all – the north of NZ is narrow so western areas like Waikato and Auckland (which are exposed to westerly rains) will see more rain – but even for these two regions the windier westerlies about to arrive means the rains will move through faster (even if some are heavy with isolated thunderstorms).

The rain bands will be heavy in places – and we see a number of fronts coming in tonight/Weds AM, another on Thursday, another on Friday and another on Sunday. But, unlike last week, there will be more wind to blow it along faster and that wind means drier, sunnier spells in between.

WIND:
As you can see below in the images and animation a ‘wall of westerly winds’ is heading towards New Zealand behind the cold front crossing the country overnight/early Wednesday morning. This means warmer weather is coming to the east with highs climbing into the low to mid 20s in the coming week or two. This will be positive news for those in places like Bay of Plenty and eastern Coromandel Peninsula as it means even if some heavy downpours this week the sun and wind will help reverse that a bit. It will also likely be welcome in many other North Island regions.

But windy westerlies won’t be welcome in Canterbury where the drought isn’t improving. There was some relief with wet southerlies and spillover westerlies in August and September, but in the past few weeks the dry has increased. West to north west gale force winds at times will boost temperatures into the low to mid 20s in Canterbury in the coming weeks and with little rain (or spillover rain from the West Coast being short lived as the fronts zip through) it means drier than usual weather is likely to kick back in, not good news. It’s not all doom and gloom – some rain/showers will make it into Canterbury, but the windier & warmer weather may help reverse that fairly quickly.

WETTER THAN USUAL
Many parts of the North Island will be wetter than usual in October. That will zap some of the heat out of the air but it means warm and wet will be the theme (not hot and wet).  Wetter than average weather, however, may come in heavy short bursts of rain with sunny/windy/dry spells around it – rather than days of drizzly lighter rain and limited sun and wind.  Western and northern areas look wetter than usual – but the east looks average and warm with plenty of sunny spells.

SPRING WESTERLIES ARRIVE HALF A MONTH LATE:
Spring’s westerlies usually kick in around the equinox in the second half of September but low pressure over the North Island and high pressure over the Southern Ocean at the time put a halt to that. In the coming two weeks we see low pressure across the Southern Ocean and high pressure north of New Zealand (a bit of a role reversal) – this places the big windy spring westerlies (the squash zone between the southern lows and the northern highs) smack bang over all of New Zealand and ends the easterlies that the late September set up created.

This means windier weather will kick in over the next 14 days with gales at times. This also means rain and showers will be carried from the lows in the Southern Ocean up into our western coastline which is why those areas look set to be wetter than average in the next two weeks. This is actual a return to more traditional spring weather in our view. 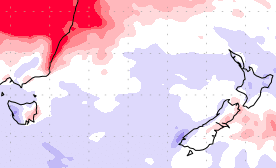 This rain map courtesy of the US Govt shows the rainfall forecast for the next two weeks. Areas with  blue shading will be wetter than average. Areas in white should have normal rainfall for October. Areas in red are likely to be drier than average – and that’s due to the windy westerly flow coming in. 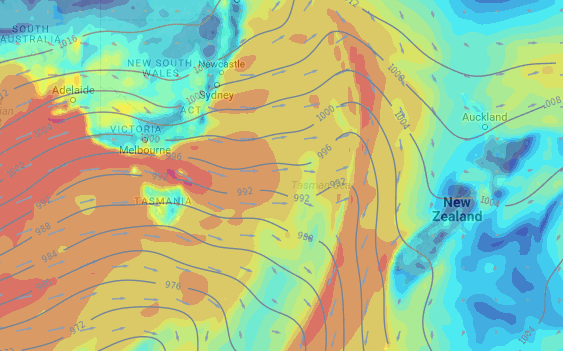 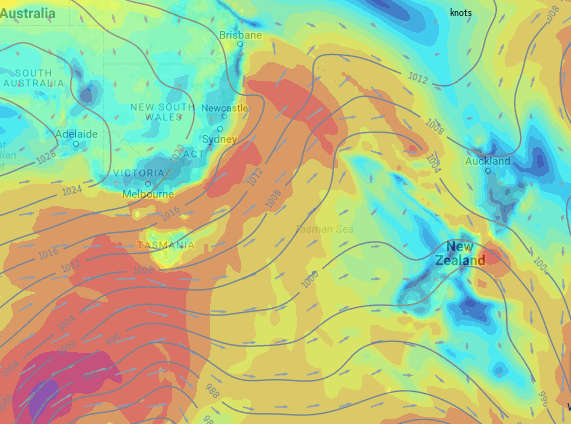 At long last! The high in the Southern Ocean has been a menace and all our usual wind has been missing. Back to Spring norm hopefully. Still very El Nino like in this neck of the woods. Any La Nina effects seem to be confined to the northern half of the North Island only and not the Southern half.