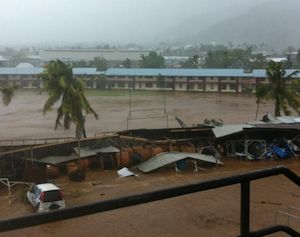 The 31-year-old was due to sing at Samoa’s Christmas in the Park today with Kiwi rapper Scribe, but the event was cancelled after wild weather killed three people and caused 3000 to flee their homes.

At least 200 were reported injured, many suffering from cuts as the storm pounded Samoa. The cyclone is tracking southwest towards Fiji and gathering strength.

Ms Vai and Scribe are staying at the Tanoa Tusitala Hotel in Apia, with other tourists seeking shelter.

Ms Vai, who won the second season of New Zealand Idol in 2005, said on Facebook: “We have stocked up ready for the inevitable … we are safe at the moment. To all the beautiful darlings here in Samoa, be safe, alofa atu (much love).”

She added: “Thankful my famz are safe even though they lost their house in the cyclone – the floods may have taken their personal belongings but praise God they are alive. Some are now here staying at Tanoa (Hotel) with us … To all who are affected by Cyclone Evan, nafo sauniuni (be prepared).

“Miss my family, my man back in NZ. I love you Samoa. Jesus take the wheel.”

He had been in the presidential suite of the Sinalei Reef Resort & Spa when the windows were blown out. “The windows just smashed in like an explosion and cut me and my new wife, and then [we] barricaded [ourselves] inside the bathroom,” he said. “I got some mattresses inside the bathroom. It actually seemed like a bomb the way it exploded.”